Vise and Shadow: Essays on the Lyric Imagination, Poetry, Art, and Culture by Peter Balakian 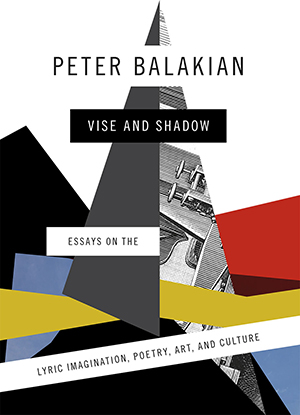 Highly acclaimed, best-selling author Peter Balakian is the preeminent Armenian writer in English today, whether the genre is poetry (Ziggurat, Ozone Journal), memoir (Black Dog of Fate), history (The Burning Tigris), or, as in the present case, cultural criticism. A palpable sense of a writer offering new insights into the relationships between trauma, memory, and aesthetic form pervades all his literary work. Vise and Shadow, which gathers a dozen trenchant essays (slightly revised and enlarged) published between 1988 and 2012, describes these relationships by exploring two dimensions of the lyric imagination in poetry, art, and culture. The book argues that the lyric imagination is able to hold experience—especially of trauma—under pressure like a vise, yielding “a unique kind of clarity and knowledge,” while the imagination as shadow embodies many realities, ironically bringing to light certain truths that would otherwise be left in darkness.

Encompassing different cultural zones, Balakian’s book eschews the Procrustean imputation by presenting vigorous, clear-sighted, unifying arguments. Using Primo Levi’s recitation of Dante at Auschwitz as an example of “unexpected revitalization and a momentary emancipation of spirit” during the “vast irrational of Nazism,” he makes an unimpeachable case for Poetry as Civilization, just as in another essay he incorporates examples from Whitman, Yeats, Lowell, Miłosz, Hayden, Rich, and Larkin to argue how poetry can be an aid to historical understanding in a way that enables us to absorb events and experiences inwardly.

One of the highlights in this absorbing book is his head-on tackling of the crucial issue first raised by Theodor Adorno and subsequently distorted by Vermont poet Chard deNiord into a polemic against the poetry of witness (particularly as anthologized by Carolyn Forché). Balakian makes a potent case for ingesting violence and transforming it into a new way of thinking about poetry in the new century. He offers major interpretations of Armenian poets Yeghishe Charents and Siamanto as well as of Armenian painter Arshile Gorky—all of whom suffered fatally because of the Armenian genocide. Avoiding bald didacticism but making careful reference to biography and history, these essays illuminate violent oscillations in the works of these creators and eloquently record how these Armenians witnessed history in motion, refusing to aestheticize the horrible but allowing us to feel the inner tsunamis of trauma.

Other erudite essays engage Joan Didion, T. S. Eliot, and Robert Rauschenberg in a wide-ranging discussion of collage to demonstrate new modes of cultural production and signification. Hart Crane’s horrifying manic-depressive cycles and Theodore Roethke’s dark side (where traumatic dimensions of personal experiences result in dramatic rhythm and aural kinetics) are presented as evidence of a new confessional orientation, with shifting assumptions about history, identity, and aesthetics. Balakian’s cosmopolitan vision and sensibility are also strikingly felt in his essays on Elia Kazan and Bob Dylan, with the author showing connections yet again among seemingly disparate genres and their unique embodiments of the zeitgeist. His book manifests sophisticated literary skill in exposing radiance in the shadow side of history.