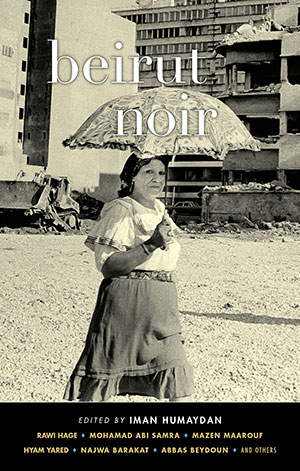 In Beirut Noir, Iman Humaydan has selected a beautiful and often heartbreaking jigsaw portrait of its eponymous city. Like many of the volumes in Akashic’s noir series, this anthology of stories immerses the reader in a stark vision of a place stripped of its tourist-friendly veneer.

In Zena el Khalil’s gorgeous story, “Maya Rose,” the spirit of a stillborn girl explores the city’s coastline, from the war-scarred buildings to the network of lonely streets and death to come, where anything may yet be possible, even second chances. In Hala Kawtharani’s “The Thread of Life,” a doctor numb to the pain he’s witnessed walks through a neighborhood where “even the rain has become violent” and contemplates a comatose patient who has made him feel again. Rawi Hage’s tragicomic skewering of Beirut’s inhabitants and their vulgar displays of social stature in “Bird Nation” is a brief but hysterical-until-it’s-not must-read.

The collection is split into three titled sections, and each section into stories assigned to neighborhoods or streets, creating a diverse and multi-angular entry into Beirut, with all its dust and grit, beaten by sectarian violence and authoritarian corruption yet still standing despite what’s been thrown its way. Not every story here lands perfectly, though none stand out for the wrong reasons, either. While each is exclusive to this English-language collection, only three of the fifteen tales were written in English. The rest are translations from French or Arabic, and it might be a testament to the talent of the translator, Michelle Hartman, that not a one suffers for it; she’s fostered all with a distinctive voice.

This is very much a political book and an emotional one, invested in criticism of the city’s history of division and often succumbing to melancholy. But there is immense love here, in words written beneath the shadow of a brutal civil war. These are writers, multiple generations of Beiruti, who live and breathe the neighborhoods of their capital, and each seems to care about even the worst of it. And there is occasional humor to be found in the darkest of its spaces. Beirut, as Humaydan explains in her introduction, is a “city that dances on its wounds.” This is a book that transcends its place in a series and stands on its own as something terrific.