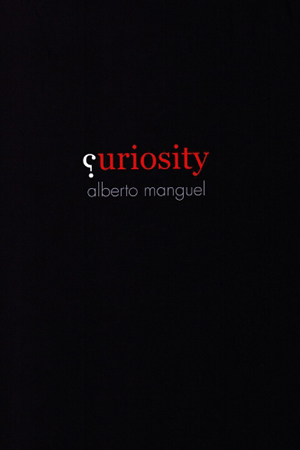 In the opening pages of this ambitious memoir—in which its author tracks the career of his own curiosity through a lifetime of dedicated reading within a capacious framework of the literary history of human inquisitiveness through the ages—he mentions that he was almost sixty when he first encountered Dante’s Commedia, the work of literature that did more than any other to guide him through the production of his unusually challenging task. Such a gargantuan project seeks proper scaffolding, and Dante’s poem is expected to supply it, along with a conspicuous amount of its content.

Curiously including the introduction and even the notes, every chapter in a series of seventeen——appositely titled as questions such as “What Is Curiosity?”, “How Do We Reason?”, “What Are We Doing Here?”, and “What Is True?”—is preceded, with varying degrees of aptness, by an emblematic woodcut reproduced from the 1487 printing of Cristoforo Landino’s commentary on the Commedia. Each of these is followed by a brief prefatory page or two of autobiographical rumination and epigraphs by an array of writers ranging from Sir Arthur Conan Doyle to Karl Marx to Margaret Atwood to Francis Bacon. Next we plunge into an erudite, often engaging, at times rambling, exposition of Manguel’s ample output of thinking and reading relevant to the chapter’s thematic question, presumably drawn from a personal collection of more than thirty thousand volumes advertised below his photograph on the book’s dust jacket.

Negotiating the enormous number of references, quotations, and citations required by Manguel’s manner of micro/macrocosmic exploration demands unusual, if not flawless, attention to detail and consideration of contextual exigencies. It is in this department that some of the failings in his performance occur. What, for example, was the author thinking as he quoted this line from Karl Marx’s Zur Judenfrage, “To formulate a question is to resolve it” for the epigraph to his third chapter, “How Do We Reason?”, when the final sentence in Marx’s 1844 article resolves his question this way: “The social emancipation of the Jew is the emancipation of society from Judaism”?

On more than one occasion, he supports a point by referring to Dante’s poem without providing a complete and precise citation, characteristic of moments when the context of the reference does not serve his argument. Twice he sidesteps specific annotation of his use of Inferno 14–16, wherein Dante encounters the violent against nature in the third ring of the seventh circle, comparing to those sinners the individuals who reacted with hostility to Rachel Carson’s Silent Spring and then quoting the famous lines of Brunetto Latini about the fiery rain that falls upon them, an inexcusable failure to recognize the scriptural allusion to Genesis 19:24–25 that conventionally illuminates the text in every set of explanatory notes. When Manguel writes that “the entire Commedia can be read as the pursuit of one man’s curiosity,” he surely must be referring to his own.