Falling in Love with Hominids by Nalo Hopkinson 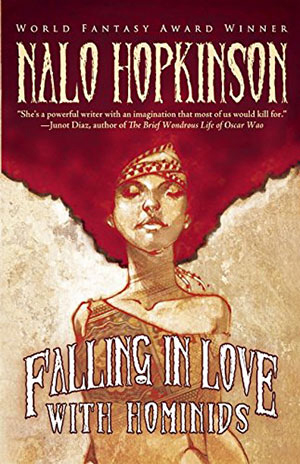 In this collection of luminous stories, Nalo Hopkinson writes with an observant intensity that makes her quirky, fantastical worlds palpable. A woman watches an elephant crash its way through her apartment. “Elephants were hairier than she’d thought. Black, straight bristles, thick as needles, sprung here and there from the leathery skin.” Never mind that elephants don’t crash through apartments on the fifteenth floor of urban buildings. We believe in the elephant in part because of the believable mess the elephant leaves behind in the woman’s home: “the scattered textbooks for the course she was glumly, doggedly failing; the crushed vase in a colour she’d never liked, a grudging gift from an aunt who’d never liked her; the destroyed television with its thousand channels of candied nothing.” Enriched by such finely chosen details, this brief, beautiful story becomes a wistful exercise in compassionate longing, as the woman stocks up on containers of lotion that she hopes to apply to the beast’s dry skin should it reappear.

Hopkinson at times deploys captivatingly jarring juxtapositions that produce an edgy, vertiginous atmosphere. “Churchy had told them [that] that penguin was from a movie called Madagascar. She’d been old enough to remember old-time stuff like that. It was soon after that that they’d had to kill her.” At other times she anchors elements of fantasy in uncomfortably sensuous experiences. “It’s 3:05 a.m. I should have known better than to have that fifth whiskey at the opening. My mouth feels and tastes like the plains of the Serengeti, complete with lion spoor.”

At the heart of Hopkinson’s stories is empathy. In a note to one story, the Jamaican-born Hopkinson writes, “I most certainly felt for Caliban, relegated to the very bottom of the barrel, oppressed by the oppressed in an inescapable chain of contempt. I am similarly a child of historically exploited islands. I know what that shit smells like.” Hopkinson turns her awareness of oppression into sometimes funny and often unsettling stories. In “The Easthound,” children are afraid to reach maturation because as adults they will turn into large, houndlike forms that prey on children. “Message in a Bottle” is a brilliantly eerie story about a visitor from the future trapped in a child’s body who tries unsuccessfully to explain to the narrator just how different human understanding of the world will become. And in “The Smile on the Face,” Gilla, an unpopular “thick girl,” discovers her true power as an ancient tree-residing witch.

Magical and believable, Hopkinson’s stories show us much about inner and outer transformations.