The Book of Stone by Jonathan Papernick 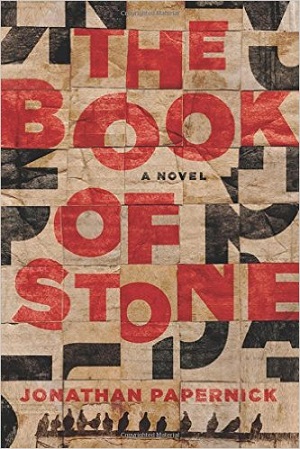 From the beginning, Jonathan Papernick thrusts the reader into the middle of a very disorganized life. Matthew Stone, suicidal, somewhat dependent on alcohol and drugs, is forced into sorting out the legacy of his late father, whom he truly did not know.

The young man seems to have no direction of his own. He considers several options, presented by people who supposedly have his best interests in mind. His mother shows up after an absence of many years and offers a more liberated life in Berkeley; his self-proclaimed uncle, an associate of his father’s, wants to lead him back to Judaism, with extreme Israel-settlement adherents in his group. A supposed FBI agent wants information on his late father’s foundation projects; a man shows up offering twenty thousand dollars for his father’s book collection.

Meanwhile, his father continues to impinge on his life by stipulating in the will certain actions he must take within a set period of time if he wishes to have the whole of the estate. His father also names him head of a foundation, with sole access to its funds, even though Matthew knows almost nothing of its several projects in Israel. The uncle, also a founder, wants access to the accounts.

At this point, the mysteries are established and Matthew must untangle them while sorting out whom to trust and what shape his life will take. Mixed in are memories of his failed past, including incomplete graduate work and the abandonment of a pregnant girlfriend.

This is also the point where plot and characterization problems crystalize. When Matthew learns he will head his father’s foundation, neither Matthew nor his father’s lawyer note that there is no information on the foundation’s account number or a password. It turns a bit unreal when Matthew understands that his father expected him to find answers in the marginalia, underlining, and titles of the father’s huge book collection. Odder still, he actually finds an answer to a bank security question by picking a title from a pile of books.

Matthew Stone is hardly substantial. From the first he is emotional, conflicted, and intensely self-centered for reasons never quite dramatized. Given the humiliations his father visits upon him, given his time in therapy, and given his impulsive need for acceptance and affection, he is more of a case than an integrated human being. Phrases such as the “volcanic humors controlling Stone’s moods” do not enlarge one’s sympathies. One has problems relating to a character so changeable, malleable, and ready to be used.

The appeal of the novel lies in plot and theme: the mystery-intrigue elements, the depictions of Jewish worship, prayer, and family life, and the full-voiced rationales for the settlement movement and terrorist actions—the latter never quite qualified by a closer look at major outcomes. The Book of Stone, finally, is less about Stone than the moral options presented to him and the personal consequences of his decisions and actions.