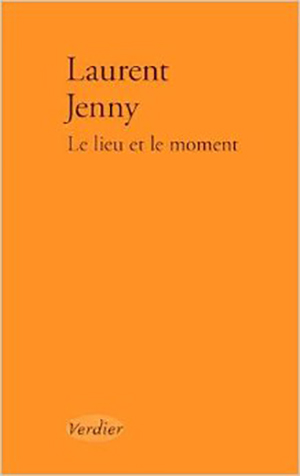 A professor of literary studies at the University of Geneva, Laurent Jenny is best known as a critic and theorist, with an impressive body of scholarly works to his credit, the most recent among them focusing upon the aesthetics of literature. As a much-younger man, he tried his hand at the novel, publishing two of them with Éditions du Seuil in the late 1960s and early 1970s.

Here, he turns to yet another form, autobiography. He is not the only critic to do so: one thinks of Roland Barthes, for example, whose late work was often colored by reflection on the self; Gérard Genette’s latest books, from Bardadrac (2006) through Épilogue (2014) come to mind as well. By comparison, Jenny’s project is briefer and less programmatic. Asked to characterize Le lieu et le moment, he describes it as an exercise in “antisubjective autobiography,” a book that focuses more on the monde than on the moi.

Certainly, the world is always present here, whether put on display in miniature (a tool kit in a mail-order catalog, a landscape in an analyst’s office, a comic book in a child’s hand) or in broader shapes (a production of Ubu roi in post-Ceaușescu Romania, a predawn fish market in Tokyo, a Greyhound bus rolling toward Boston). Yet the “I” is always in evidence here, too—as indeed one might expect it to be. Refreshingly enough, Jenny expresses very little nostalgia and almost no regret as he casts a glance over his past. He carefully encloses the word “revolution” in ironic quotation marks when alluding to the events of May 1968, and he meditates on André Malraux’s notion of “lyrical illusion” as if he might have been guilty of that sin.

Mostly, however, Jenny gazes at his past in a poised, lucid manner, one fueled by an apparently inexhaustible intellectual curiosity that he brings to bear on a fundamental question: how can an individual traverse such large expanses of space, time, and event, and still be imagined as the same person?