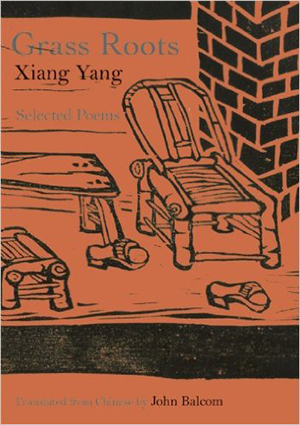 The poems in Grass Roots speak almost exclusively of the present moment, which in Xiang Yang’s case happens to be the point at which the aesthetics of Chinese poetic tradition and the original aspects of the poet’s voice combine to form something new. Translator John Balcom renders the poems in a measured, understated English that generally eschews the verb in favor of the noun and adjective, thus privileging states over changes. The subjective freedom of his translation suggests a familiarity with Xiang Yang’s poetry that is both advantageous and dangerous, because it allows for richly empathetic translations yet also enables decisions that could easily be called into question.

Xiang Yang’s engagement with the Chinese classical tradition is clearly visible in formal structures like the ten-line poem (his own invention, yet to which he holds with classical assiduity), in traditional themes and subjects like the natural world and the Chinese lunar calendar, and, most importantly, in his commitment to concrete experience, the here and now of his poetic vision. Sequence and description are crucial to these poems; the poet attempts to step back and allow time and specific detail to dictate the shape of his narrative. Perhaps this is most evident in “The Four Seasons,” a majestic twenty-four-poem cycle that presents one poem for every solar term in the ancient Chinese calendar. The pieces are not just nominally related to the greater, traditional structure; they are instances of it, captured in narrative.

The poet’s intentional connection to traditional modes of expression and reception is clear, and John Balcom’s translations communicate that. In “The Four Seasons,” for instance, he mostly confines his translations of titles to two words or two stresses, mimicking the two-character source titles: “Grain Rain,” “Great Heat,” “Grain in Ear,” and so forth. More generally, he translates verbs into more static parts of speech, perhaps to amplify a sort of traditional tranquility. In “White Dew,” “he closes his eyes, he opens his eyes” becomes “eyes closed, eyes opened”; in “Waking of Insects,” “bird song / bites dawn sunlight and forest shadow into fluctuating scales” becomes “This morning bird song . . . / Scaled to match the light and shadow at dawn”; in “My Cares,” “And the pond passes circling ripples on the wind / to the fish to be dealt with” becomes “And the pond sends the circling ripples with the wind / To swimming fish,” and so forth. Balcom’s ubiquitous preference for merging verbs into adjectival phrases or deleting them entirely strengthens static image and removes dynamic energies that might be considered noisier in English than in Chinese.

And yet the poems are not quiet. They are vividly aware of the aporias and ambiguities inherent in the classical Chinese narrative that iterates time through space, and they speak to them. They bend their own formalist dictates, speak in diverse registers, and sometimes explode in riots of color and speed, as in the poem “Chaos,” which demands an energetic performance.

Balcom’s flexible English represents some of these differences with facility; lines like “A bloody rain falls on fields plowed by bullets” stand apart from lines like “The surprise encounter of the fish and the leaves,” which are brilliant for entirely different reasons. Yet many of his decisions, especially his frequent deletions, seem hard to justify. Why erase the subheading “Thoughts on language and poetry” from “The Soil and the Flower?” Why delete the commas in “Drinking Alone” and “Great Cold” that have a clear rhetorical effect, while adding commas between nouns in “Chaos” that the poet himself mashes together in performance? Such decisions could be justified in a critical introduction, yet Balcom’s introduction makes no mention of his process. Translation is frequently maligned as either a derivative act or a violent, domineering one. Perhaps greater transparency could prevent it from being either.