Signs Preceding the End of the World by Yuri Herrera 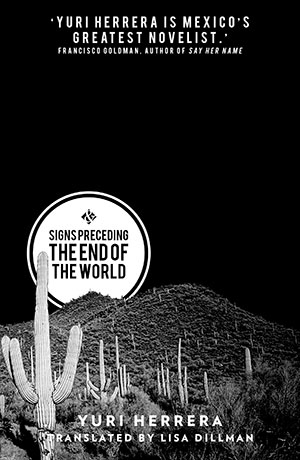 Makina is in charge of a small Mexican town’s telephone. A reliable messenger, she knows how to keep a secret and when to keep her mouth shut. She is dangerous when threatened, quick to defend herself against lecherous fools, and unafraid of speaking truth to power. The heroine of Yuri Herrera’s second novel finds herself facing unprecedented challenges when she sets out to find her brother, who immigrated to the United States a few years earlier, and bring him a message from their mother.

Makina’s story develops elemental themes of family and migration within a novel structured around an equally elemental journey narrative and guiding references to earth, water, air, and fire. Her success as a messenger relies on Makina’s ability to adhere to a set of rules she tells herself, among them, “You are the door, not the one who walks through it.” Makina’s search for her brother obliges her to violate this rule, but it is only when she dares to walk through a number of doors, literal and figurative, that she reaches a definitive and enigmatic encounter with herself.

The eventual dissipation of the difference between a conduit and the substance that passes through it describes Herrera’s novel as well. Its basis in the age-old formula of the quest gradually gives way to its singular ability to put into words the peculiar states of being that define our present-day world, characterized by radically varying degrees of mobility, their ease or difficulty determined by overlapping spaces, multiple borders, unexpected obstacles, sudden violence, absurd authority, and stubborn inequality. The novel’s nine chapters and descriptions of guides, peril, and border crossings are a clear reference to Dante.

Related to this is the story’s emphasis on the unsettling power of intermediate spaces formed by several junctures, such as the world and the underworld, outside and inside, words and feelings, and consciousness and dreams. At one point along her travels, Makina’s guide leads her to a door. She enters and descends a staircase that opens onto a space compared to a “sleepwalker’s bedroom.” The density of this image captures the profound sense of unease that Herrera’s novel conveys. Makina’s life transpires in a space intended for rest but where she is compelled to keep moving between waking and sleeping, where perhaps a dream but more likely a nightmare awaits at almost every turn.

A translation is also in many ways the inseparable encounter of a conduit with the substance that passes through it. For the most part, Lisa Dillman’s effort succeeds. She also addresses the specific challenges she faced in a helpful note at the book’s end. The occasional clumsiness of certain words and turns of phrase serves to remind the novel’s readers of the limits to mutual understanding, which are actually necessary elements of communication and which underscore the way in which dialogue is a journey whose lack of a definitive endpoint is precisely its most vital trait.