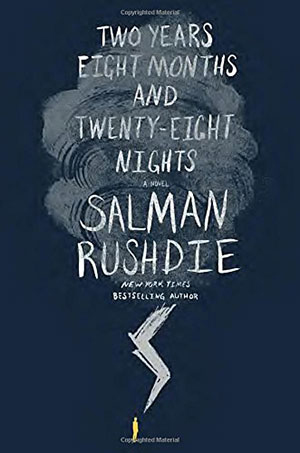 In his captivating new novel, the title of which adds up to the magical storytelling formula of 1,001 nights, Salman Rushdie tells a story in which jinn and jinnia turn the earth into a battleground in a war between the forces of reason and faith. Set in our own time, the novel is told from a period one thousand years in the future, a time so removed from the twenty-first century, the narrators say, that “we argue, sometimes, about whether we should call it history or mythology. Some of us call it a fairy tale. But on this we agree: that to tell a story about the past is to tell a story about the present.”

At the core of this novel, Rushdie revives the spirits of the medieval thinkers al-Ghazali and Ibn Rushd to conduct an inquiry into the influence of faith and reason in the contemporary world. For Rushdie, Ghazali is the forefather of extremist fundamentalism. “I have found,” says Ghazali, “that the application of a degree of ferocity to the person usually brings his thinking into line with my own.” Rushdie brilliantly reimagines the atrocities of al-Qaeda and ISIS (“crazy white-eyed trance-killers from hell”) as the workings of the dark jinn, who take to heart Ghazali’s admonition that “Fear leads [man] towards faith, not as a cure for fear, but as an acceptance that the fear of God is the natural and proper condition of man’s lot.” Rushdie turns to Ibn Rushd to wage the counterargument. Extolling the necessity of reason, Ibn Rushd says, “It is not that God does not exist but that like any proud parent he awaits the day when his child can stand on its own two feet, make its own way in the world, and be free of its dependence upon him.”

In the end, despite “a wild international spree of decapitations, crucifixions, and stonings” perpetrated by the dark jinn and their entranced followers, reason prevails. As the narrators note, “the use of religion as a justification for repression, horror, tyranny, and even barbarism . . . led in the end to the terminal disillusion of the human race with the idea of faith.” The result is one thousand years of peace. And yet Rushdie doesn’t end his novel on this utopian note. The narrators observe that, with the death of god and the permanent closing of the passages that allowed such entities as jinn and gods to descend to earth, people have lost the ability to dream. “We read of you in ancient books, O dreams, but the dream factories are closed. This is the price we pay for peace, prosperity, tolerance, understanding, wisdom, goodness, and truth: that the wildness in us . . . has been tamed, and the darkness in us, which drove the theater of the night, is soothed.”

The condition that the atheist Salman Rushdie presumably looks forward to—a world in which the clash between reason and faith has been settle in favor of reason—appears to bother the novelist Salman Rushdie. As Rushdie’s narrators say, “Mostly we are glad. Our lives are good. But sometimes we wish for the dreams to return. Sometimes, for we have not wholly rid ourselves of perversity, we long for nightmares.”