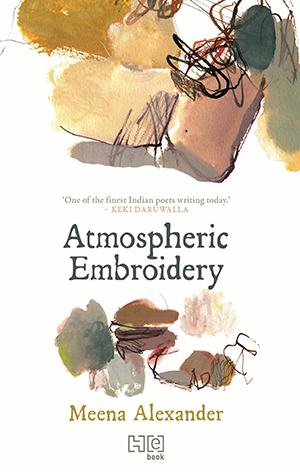 Meena Alexander is among the most visible of South Asian American poets writing in the US. She is prolific, having to her credit seven books of poetry, a memoir, two novels, two books of academic criticism, and two volumes of essays, The Shock of Arrival and Poetics of Dislocation. The last two display Alexander at her best—weaving personal reflections and critical analysis into a seamless narrative.

As a poet, Alexander is not easy to follow and even harder to grasp because of the multiple references that go into layering her poems. Even though she paints on small canvases, her ambitions are large; she uses wide-angle lenses, and her feet cover vast tracts of landscape, roving from sharply delineated details of objects at hand to remembrances from her childhood, stamped in her personal geographies in Sudan, England, India, and the US. In addition, she draws from Hindu, Christian, and other mythologies to offer literary and historical precedents as textual testimonies. Her favored spots are sites of carnage, violence, and death. These images are slung at readers at a velocity that makes them duck for cover. They may flinch, but she will not spare them from facing what she has witnessed.

Atmospheric Embroidery is divided into five sections, leading off with the header “Fragments in Praise of the Book,” naming what is to follow: “Book of alphabets burnt so that truth can be told.” The lyrical impulse is strong here, and I feel it should be allowed more play in her poetry. It would also counterbalance the angst-ridden world she has so assiduously cultivated in book after book. “Aesthetic Knowledge” offers another lovely example of sensory touches: “landscape becomes us . . . an interior space bristling with light”; “tears from the domes, like droplets of milk”; “gold leaf pasted on paper / Utterly fragile.”

The reference in the title poem is to Alighiero Boetti’s artwork The Thousand Longest Rivers, but the connections among “Wads of ice-cream glisten on Route 6,” “fissures in magma,” and “Season of snipers in the heartland” remain unclear. Obscurities cloud “Children of the House” even as “Ars Poetica” and “Tarawood” create magic and beauty. A fine example of how an authentic political poem ought to be written is “Moksha II,” about the Delhi woman raped by six men in a moving bus.

Alexander reworks old material in new contexts. The Indian Ocean Blues and Darfur poems revisit her crossings of the Indian Ocean since the age of five. The poems in the Darfur section were inspired by drawings by children who lived in the refugee camps. Scattered pieces of life are crystallized in univocity.

Alexander has also remained faithful to her signature technique and style: the language and syntax in the symbolic space of the poems mirrors the fractured, torn, wounded, and disjointed reality of the world and our shared life, and the poems serve as devices to force the reader to confront this world.