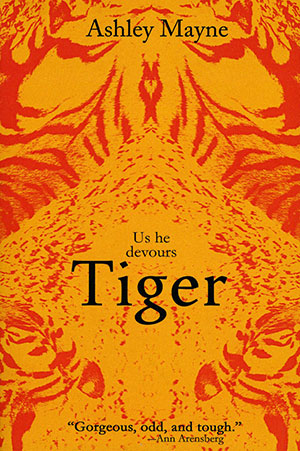 Ashley Mayne’s second novel, Tiger, is a wonderfully empathetic look into the hearts and minds of profoundly damaged people.

The novel plunges us deeply into the lives of its two central characters. Tony, heir to a large fortune, is a freelance photographer living in Brooklyn who encounters a feral girl on his way home one night. He takes the girl in, fighting against his own base impulses and the girl’s advances. Ochoa is a priest struggling with loneliness and his lust for the boys who populate the Catholic school where he is employed.

The characters converge in the past, Mayne brilliantly weaving the time-jumping dual narratives into a readable, compelling story. Tony and Ochoa had a brief relationship when Tony was a boy attending the school. In the present day, Tony discovers that Ochoa has died. This sets in motion the two men’s stories, the chapters alternating between Ochoa and Tony, their similar histories of abuse and neglect, their complex romantic relationship. There isn’t a character in Tiger who is not in some way damaged, and more often than not that damage is of a sexual nature.

At its heart, the novel is about regret, guilt, and very human characters learning how to live with themselves. It is about the transference of trauma and how we deal with it, whether we transfer it ourselves. The most fascinating moments come when Mayne directs her intensely empathetic and detailed eye on the inner struggles of the characters, most notably a harrowing scene in the Indian jungle involving the priest and a tiger.

The issue with the novel, the frustrating bits, are that Mayne is so talented that she does not turn this kind of language off when describing even the most mundane actions. The same skill and poetry that will make your heart break when applied to the difficult inner lives of the characters will have you screaming for mercy when applied to a character taking a walk down a cold street in Brooklyn at night. Every detail lovingly rendered, expanded upon, and then expanded upon yet again. This Russian nesting doll–style of prose is both the novel’s blessing and curse, at points taking us to high moments of literary bliss and in others, as the author puts it, “wander[ing] in ever-widening circles, like a horse dragging a broken plow.”