The Physics of Sorrow by Georgi Gospodinov 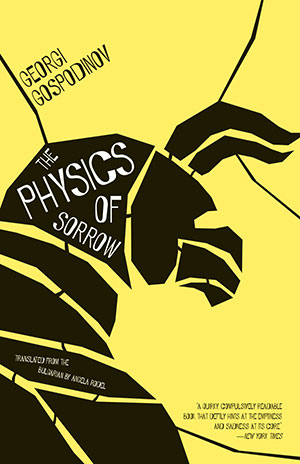 Georgi Gospodinov is a Bulgarian writer, poet, and playwright. He was born in 1968 in Yambol, in southeastern Bulgaria, and spent most of his childhood in Topolovgrad, the even smaller “town of poplars” at the foot of Sakar Mountain. Gospodinov has written four books of poetry, which influenced his style when he turned to prose. His first, Natural Novel, was an instant success in Bulgaria and has been translated into twenty-one languages.

The Physics of Sorrow is his second “novel.” Actually, Gospodinov blows up the norms and definitions of well-defined styles, wryly noting himself: “Purebred genres don’t interest me much. The novel is no Aryan.” The readers of his new prose enter a true labyrinth with main streets, parallel routes, side streets, rest areas, and no outlets—all paved with his endless supply of stories, and stories within stories, spanning from the present day of a country in transition from socialism to democracy to the myths of ancient Greece.

Gospodinov, as the narrator, relates moments from his life, starting at the moment of birth and going back to his ancestors. The topics range from everyday life to natural philosophy, all colored by his rich imagination, sense of loneliness, and acute sensitivity. The legend of the Minotaur is a recurring theme, viewed as an innocent creature with the head of a bull and the body of a man, thrown in a dark prison through no fault of his own, rejected both by men and animals. The eighth chapter, “An Elementary Physics of Sorrow” (and especially the section “Migration of Sorrow”), lets the reader get very close to the narrator. We can easily get lost in this maze, if not for the helpful thread of Ariadne provided by Gospodinov’s unwavering compassion and humanity.

Masterfully written in rich language, the novel meanders like a stream in the flatlands. Angela Rodel does an excellent job of the difficult task of translating some wordplays and proverbs without losing too much spice. (Author note: I dedicate this review to the memory of my mother.)