A Perfect Crime by A Yi 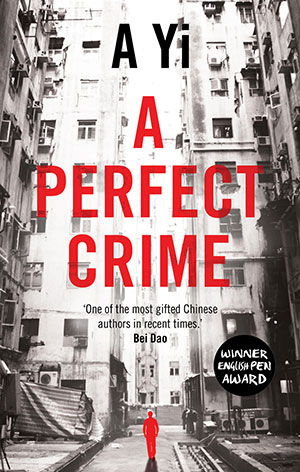 Doused in blood and gushing with ethical conundrums, A Yi’s A Perfect Crime is a disconcerting medley of misanthropy, escapism, and media monstrosities. Woven from tales garnered in the author’s previous career in law enforcement, Yi’s psychological insights are frequently bookended by realistic renditions of urban China’s legal processes. Where Anthony Burgess sought to conjure a world of abstract flair and inexplicable cruelty in A Clockwork Orange, Yi strikes a far deeper chord, delving into the mind of a youth whose lethal motivations are abundantly and undeniably troubling.

Ensnared by a cycle of frustration brought on by his condescending aunt and apathetic mother, a high school student determines homicide to be his only feasible release. After gathering his supplies from a cast of disagreeable shopkeepers, the untrained execution of the teen’s gruesome task suggests that his plans of indefinite retreat may be little more than distant pipe dreams. Compounded by unforeseen variances, the youth pushes through China’s densest cities, periodically catching glimpses of himself on televisions and bulletin boards.

Yi’s narrator presents the steepest initial hurdle in A Perfect Crime. His early resolve to kill someone (though at that point he’s unsure who) is difficult to chew on. His plans to kill his elder neighbor’s dog and brief jabs at the homeless and greedy are repulsive but feel significantly less engaging than they are intriguing. However, once the narrator’s peril begins compounding in spades, his general apathy toward his situation ironically becomes one of the novel’s strongest facets. Yi conjures a desire to witness the character relent, revealing a shred of empathy that appears innately absent within the character. This notion is briefly and frequently teased but never fulfilled in any predictable fashion, leaving the youth far more compelling than he appeared in the work’s prologue.

Looking beyond the narration, Yi establishes himself as a master of description, conveying the claustrophobia and congestion found in the tightest corners of urban life. Furthermore, Yi refrains from elaborating on the scope of the novel’s world until deep into the novel’s chase. Here, Yi’s setting falsely echoes a position of control while limited to the few locals the teen faces before the protagonist is lost in the overwhelming scope of the endless skyline.

Though the final act’s dissection of news media and investigative journalism is implemented adequately, it feels a bit disjointed from the rest of the novel. This does not hinder its overall trajectory, but it does feel like it could have been interwoven into the rest of this discourse, even briefly.

A Perfect Crime is a bit off from the descriptor awarded in its title, but A Yi finds staying power in his dauntless approach to rationalizing the seemingly irrational.