The Abolition of Species by Dietmar Dath 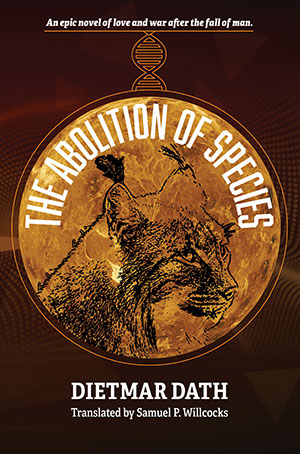 When, in the late nineteenth century, H. G. Wells set out to satirize capitalism, industrialization, and the Victorian class system, he chose evolution as his extrapolatory device. The first of his self-described scientific romances, The Time Machine (1895), plunges readers into the Earth of the year 802,701, by which era Darwinian forces have resulted in the new forms of humanity Wells needs to concoct his novel, the work that begat modern science fiction. Now, over a century later, German novelist Dietmar Dath has contrived another evolutionary romance. In The Abolition of Species, genetic engineering has enabled humanity to manipulate the direction of evolutionary development.

Hundreds of years before the novel, a group of humans began a project “to identify descendant species of the megafauna which had lived . . . in the Pleistocene epoch and herd them into special nature reserves.” The enterprise was a disaster, its only achievement being “a small pride of lions, which finally provided the substrate for [a far more ambitious] experiment: the creation of the Gente,” the species that will supplant humanity.

During the ensuing Wars of Liberation, genetically engineered animals, insects, and plants, endowed with language and enhanced intelligence, all but wiped out the human species. Afterward, technology further enables “the greatest diversification of the total terrestrial gene pool since the Cambrian Explosion.”

Now, hundreds of years later, Cyrus, “the Lion that was once a man,” rules the Three Cities, the political and social locus of the Gente. Preoccupied with court and personal intrigues, Cyrus, his court, and the denizens of the cities are only dimly aware that, across the ocean in the jungle near Brasilia, a new life-form has gestated: a machine intelligence “composed of [its] logical premises.” Once embodied, this entity “devoured, digested, excreted, and transformed, launching new waves of life.” These creations, the Ceramicans, will soon swarm across the planet absorbing its biomass and threatening the survival of the Gente.

The second half of the novel jumps more than a thousand years ahead and moves off Earth to the newly terraformed planets of Venus and Mars, now home to the descendants of the surviving Gente. Here Dath’s concerns about identity, morality, politics, and evolution merge dynamically as further genetic self-sculpting spawns a new fusion of human, animal, and cyborg.

The Abolition of Species is essentially a philosophical inquiry into evolution and identity, enmeshed in a plot that partakes of (and sometimes subverts) many story types: political thriller, war novel, quest narrative, tale of speculative future science—even coming-of-age story. Dath’s elaborate plot, populated by a mélange of posthuman life forms, explores an urgent concern: what will happen to the meaning of “human” once technology can enable evolutionary powers heretofore reserved to nature? This novel demands sustained attention; immersion in its philosophical, scientific, aesthetic, and political concerns; and no small amount of persistence. But don’t let that put you off. In Samuel P. Willcocks’s masterful translation, The Abolition of Species is a transgressive revelation, a worthy philosophical successor to Wells’s generative novel.