From Lone Mountain by John Porcellino 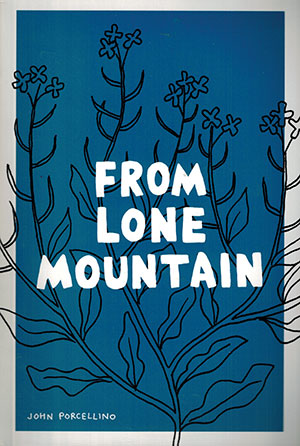 “The world is very large,” John Porcellino tells us early on in From Lone Mountain, and we are convinced. Porcellino’s greatest gift as a cartoonist—and he has many—is his knack for telling very small, specific stories with heart and intelligence that paradoxically show us the wonders of our very large world.

When I was in training to be a commercial copywriter, again and again it was drilled into my head that the more specificity and detail you can include in your copy, the more universal it becomes to those reading, watching, or listening to it. The truth of this is revealed in such small moments in From Lone Mountain as John P. (as he is known to his legions of fans) discovering his dad saying the word “roof” in exactly the same apparently unusual way he does, and I found myself imagining the sound as I read his recounting of the incident. It probably vaguely rhymes with “hoof,” not with “goof,” as most people I know would say it. I love those sorts of regional dialect variations, and Porcellino is well traveled enough to have stockpiled hundreds.

From Lone Mountain is dense with haiku-like short stories in the form of comics. It also features text pieces from Porcellino’s King-Cat Comics series, from which the book was compiled. Some of the text pieces are typeset, others are in Porcellino’s distinctive hand lettering, and all are evocative, intimate, and moving, like handwritten letters from a faraway loved one.

That’s really Porcellino’s work in a nutshell. He offers up observations from the whimsical to the profound and every shade of emotion in between. I’ve been reading autobiographical comics for nearly forty years, and it’s the genre of comics that most appeals to me. From Harvey Pekar’s gritty, urban short stories to the magical realism of James Kochalka and the family dramas of Jason Marcy, autobio comics have given me a glimpse of the inner lives of many great cartoonists. But none are more generous, thoughtful, and mind-expanding as the deceptively simple works of John Porcellino. In From Lone Mountain, John P. lives his life, makes his observations, and reports back to us with honesty, humor, and insight. To me that is literally the highest achievement possible in comics.