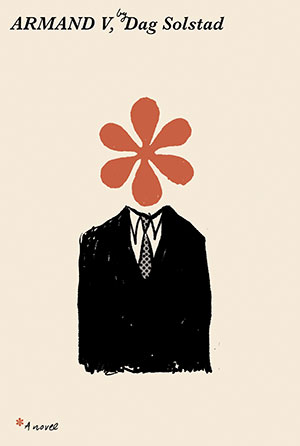 Via these annotations to a nonexistent text, Solstad follows his protagonist, Armand V, an ambassador in Norway’s foreign service: Oslo, Cairo, Jordan, Budapest, Madrid, and, finally, London—his career pinnacle. This diplomat had “a way with words” that allowed him to “master the game” for the “small country he served.”

Supporting roles go to childhood friends, college classmates, other diplomats, two wives (N and her twin sister), a daughter (unnamed), a son (Are), and the son’s landlady. The ultimate focus, however, is on the father/son relationship between Armand and Are.

Armand’s profession dictates that he publicly support his country’s involvement in foreign wars, yet privately he scorns combat, having lived through the Cold War, the Vietnam War, and the still-running War in Afghanistan (on which Solstad had based Armand V in 2006). Throughout, the ambassador frames the United States with disdain in an unrelenting barrage of deferential diplomacy: “the world’s mightiest superpower,” “the most powerful nation in the world,” “the world’s one and only Superpower,” “the superpower US.”

No surprise then that Armand is shocked when Are enlists, ending up on a murky mission “serving with a superior Western military power in impoverished Asia.”

Solstad hints at mythology, modernizing the ancient lore of conflict. Consider the Norse god Odin and his sons, Thor and Höd (half-brothers), reflected in Armand and his son, Are. Odin hungered for wisdom, trading one eye for it, while Armand yearns for esteem, exchanging his ethical standards for it.

Armand’s son exhibits elements of both Thor (god of thunder and war, who traveled to the enemy realm of the giants) and Höd (the blind “warrior” god). Are journeys to a faraway land, fighting alongside the giants (“the world’s one and only superpower”), and loses his sight. Solstad evokes Thor when a lightning bolt nearly strikes Armand and Are as they hike.

All the while, Solstad chats merrily away with himself. Readers eavesdrop as the author toys with his emerging “us vs. them” tale, departing at times from the storyline to mosey around on other topics. His intellectual maneuvering is often hilarious.