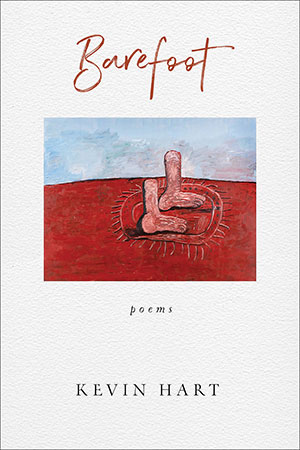 In Kevin Hart’s eighth book of poetry, he uses poetry to talk to the absent or, rather, the ambiguously present: his late father, God, past lovers, and versions of himself.

Barefoot begins with elegies for the poet’s father (see WLT, Nov. 2017, 61). Hart movingly explores the way that his father, unknowable now in death, was unknowable in life. Death highlights the inscrutability of our parents. “I hear the silence of two crows // Then look down at my arm: / Not even your shadow’s there to touch,” he writes in “Little Book of Mourning.” In “Eclipse,” he asks, “Where are you, father, in these ragged hours?” This sense of distance, however, doesn’t preclude tenderness, as in the title poem, in which the poet creates an inversion of Dylan Thomas’s famous plea: “Don’t sleep tonight, dear father, darkness eats // Shadows and men alive, just walk barefoot / Into that other world.” Many of the volume’s most striking lines are from this emotionally charged section of the book. In “Again,” he speaks of “mosquito gangs / Falsettoing in hot, dark rooms at night.” The vivid images and imaginative phrasing are a testimony to the authenticity of feeling.

As is often the case, everything Hart says about his earthly father seems to apply also to his Heavenly Father. Beginning with the opening villanelle and continuing throughout, Hart addresses God as “Dark One,” a phrase that evokes the tradition of “negative theology,” which has roots deep in the Christian tradition and thinks about God in terms of what He is not, emphasizing the mysterious, the unknowable nature of the divine. In “Little Songbook of the Dark One,” Hart writes, “All afternoon, my scalene heart, Dark One, / My mind runs and clatters after you, / And then all night the wild track of your love.”