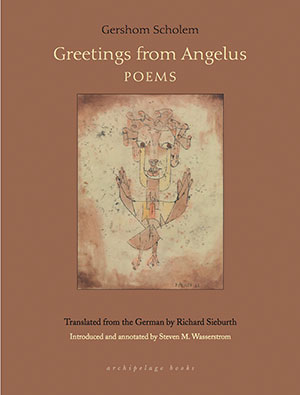 When Richard Sieburth published the first translations of Gershom Scholem’s poetry in Bomb magazine in 2002, it was a great revelation to Scholem’s dedicated readership. Scholem had not written his poetry with publication in mind—these were private poems, sent in letters to friends or hidden in his diaries for his eyes alone.

Gershom Scholem (1897–1982), born Gerhard Scholem, came from an urbane German-Jewish family in Berlin. Among German philosophers there has been a long tradition of writing private poetry, sent to friends in letters but not written for publication. Walter Benjamin—Scholem’s friend to whom most of the poems in Sieburth’s translation of Greetings from Angelus were sent or dedicated to—also wrote epistolary verse, as did the great German philosopher Martin Heidegger to his muse and lover, the Jewish philosopher Hannah Arendt.

The friendship between Scholem and Benjamin was a deep and passionate intellectual communion that had begun when Scholem was seventeen and Benjamin twenty-three, and only ended in 1941 with Benjamin’s suicide (or murder) on the border of Spain in his flight from Nazi-occupied France. Most of the poems that Scholem wrote before Benjamin’s death are private conversations, exchanges, responses, and interpretations centering on Benjamin and his ideas and works. There is a love poem in Greetings from Angelus that Scholem wrote to Grete Bauer, but even here Benjamin is doubly present—the poem’s erudite title, “Paraphrase of the Prose of the Diary,” has the subtitle “after Walter Benjamin” and the postscript “on first reading [Benjamin’s] ‘The Metaphysics of Youth.’” As Steven M. Wasserstrom, the editor of this volume, remarks in an endnote, Scholem confessed in a letter to Grete Bauer that she was—with Walter Benjamin—the “‘midpoint’ of his life” (Grete was to reject Scholem’s advances).

Scholem was primarily a critic and commentator on the Kabbala and on other literary and philosophical texts, which is very apparent in the poetry in Greetings from Angelus. As a critic, he expressed his creativity through interpreting his philosophical and literary idols and, most importantly, God himself. In writing poetry, however, Scholem has chosen a platform in which poets traditionally speak in their own creative voices, espousing their own ideas, feelings, and judgments.

Scholem’s voice is strong, and what surprises in his poetry is that the poems are in fact highly distilled critical responses to, and interpretations of, ideas and texts. The subject of his poetry is mostly focused on other people, specifically the literary figures and intellectual circles around which his career as a critic revolved. He used writing about others to communicate his own ideas, while nominally appearing to stay absent from his poetry. We see a great analytical mind at work, and as Wasserstrom points out in his introduction, Scholem was a poet who insisted on traditional forms and an early twentieth-century German who was not distorted by Third Reich ideologies and neologisms. Richard Sieburth’s deep understanding of Scholem’s thought, and his masterful re-creation of Scholem’s rhythms and rhymes, reflect the inner workings of these original German poems. Sieburth’s translations offer a fascinating insight into the thoughts and literary sensibility of one of the great minds of the twentieth century.