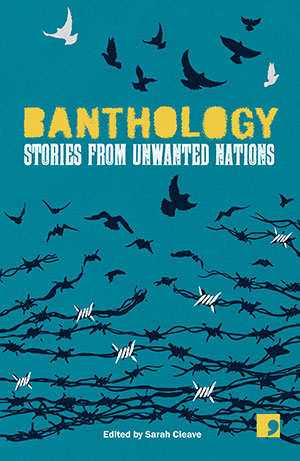 In 2017 President Trump made the contentious decision to institute a travel ban that effectively barred individuals from seven different countries from entering the United States. As a response, Comma Press decided to publish Banthology: Stories from Unwanted Nations, which features seven different stories, each by an author from a “banned” nation.

The stories, while cohesive, are not so similar that reading them feels monotonous. Rather, utilizing uniquely different styles, each author manages to capture and fully develop a different perspective on the same overarching themes of immigration and xenophobia. Rania Mamoun, in “Birds of Paradise,” tells of a woman waiting in an airport, longing to fly like a bird, but instead finding herself stuck on the ground, unable to leave. Zaher Omareen chronicles a young man’s hectic journey across Europe as a refugee. “Phantom Limb,” by Fereshteh Molavi, illustrates the life of an undocumented worker living in the US while his family waits in his home country.

Works by Wajdi al-Ahdal, Najwa Binshatwan, and Anoud are the anthology’s strongest works. They each tell a unique story with captivating energy. Al-Ahdal’s “The Slow Man” reads like a fable, full of warning and wisdom. Incorporating the story of Yusuf, he effectively illustrates how a small action can have ramifications thousands of years into the future. Anoud’s “Storyteller” centers on a woman telling her story in a London restaurant, chronicling her life as a child in Iraq during the sanctions and her experience as an immigrant in London. “Return Ticket,” by Binshatwan, is an energetic tale of a woman’s journey to and from her peculiar home village of Schrödinger. It takes the form of a letter written by a grandmother to a grandson she may never know.

As a whole, the anthology is a short but effective act of resistance to the 2017 ban, with ideas transcending customs and borders. Reading it was like stepping into seven different lives in seven different places. For those who want to ban entire countries, this anthology sends the clear message that ideas can never be shut out by borders and invites readers to see that individuals from these nations are not enemies but neighbors.