Footnotes in the Order of Disappearance by Fady Joudah 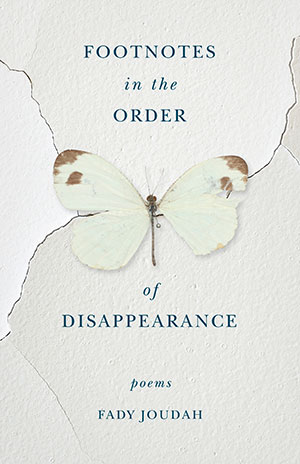 Footnotes in the Order of Disappearance progresses through gradual inoculation. Bit by bit, the reader becomes accustomed to the irony and paradox with which Palestinian American poet, translator, and physician Fady Joudah works. Joudah writes with a “fever,” crafting a dense lyricism that forces the reader to become a “footnoter,” inking the margins with glosses to his medical metaphors. Tracing the smoke trails of philological, global, and personal themes across the book’s three main sections reveals that Joudah’s own lines are, as the title quietly hints, the antithesis of footnotes, working not to explain or unpack but to convolute.

Joudah exploits the fuzziness of language from the outset, toying with false chiasms and faux epigrams like “the falafel of truth / and the truth of falafel.” Bathetic, ironic, and obscure by turns, the book’s first section complicates the “common” with roundabout epithets like “the grackle, common, / indigo, icteric-eyed New World // passerine.” Associations that hinge on sonic rather than semiotic connections (“not chasm but chiasm”) and moments of ambiguous syntax foreground words as words, functioning originally in their “status as feeling.” The question of origins, too, recurs throughout Footnotes. What begets what? “Do cucumbers bear / the stars of their flowers?” By the final, title poem, the speaker, lapsing in and out of fever, appears to both sublimate and revert to a state of pure materiality, leaving that question dangling: “Consider me a color / an unspoken sound / aphasia won’t clarify.”

The enticing middle section of Footnotes is written in conjunction with the Syrian Kurdish poet Golan Haji (see WLT, Jan. 2018, 20–21). While poems like “After No Language” venture into the metatextual deep end, Haji’s wry narrative voice, when mixed with Joudah’s, provides a lucid respite from the denser lyric poems that precede it. Alongside moments of intimacy, scenes of death and despair are handled with a quintessential blend of irony and transparency as the speaker encounters “hordes of refugees in riot control formation without the gear” or sees again the face of the “woman who awakened your first lust when you were a kid . . . killed in the morning while talking to her sister on the phone.”

While Haji and Joudah intentionally efface the lines of authorship in their collaboration, meaning remains hermetic. The primary content of all of these poems, these “footnotes,” is hidden away somewhere in the poet’s (or poets’) private mental library. The lines in this book are simply the scraps that, somehow, escaped into the outside world, tasking us with summoning the excitement of an archaeologist sorting through ostraka—an arcane path to the ordinary. Perhaps we owe the absent fragments to one of Joudah’s most powerful paradoxes: “I call the finding of certain things loss.” And the losing of certain things?