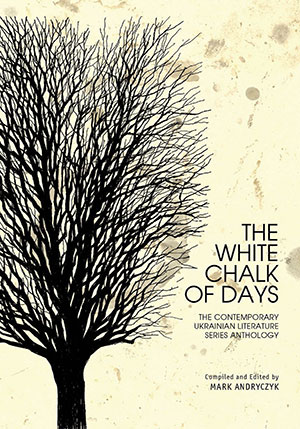 This dense, exciting anthology brings together fifteen Ukrainian poetry and prose writers with works from the late-Soviet and, mostly, post-Soviet period of the last twenty-five years. These writers were featured in live readings in the Contemporary Ukrainian Literature series in NYC and Washington, DC, between 2008 and 2016, sponsored by the Harriman Institute of Columbia University and the Kennan Institute at the Woodrow Wilson International Center.

Freed from imposed Soviet artistic strictures yet questioning also the inherited default narrative of Ukrainian nationalism—in both subject matter and style—this period has been one of immense discovery, broad experimentation, and intense debate among contemporary Ukrainian writers.

The range is great, from rock stars to children’s authors, from old-guard intelligentsia through the newest lights. There are Viktor Neborak’s Bu-Ba-Bu (burlesque-bluster-buffoonery) poems, popularized since the 1990s, Serhiy Zhadan’s funny, edgy, and strange poems, and one prose piece (“Owner of the Best Gay Bar”), and the sensual, mature prose of Sofia Andrukhovych (see WLT, Sept. 2005, 24–32).

Poet, story writer, and novelist Yuriy Vynnychuk is an example of a writer who has straddled generations. Unable to publish his earlier works directly under the Soviet regime, he managed to get many into print anyway by pretending they were “translations” from Old Irish, Old Welsh, or “Arcanumian”—a civilization he had invented. The older generation is represented also by poet Hrytsko Chubai; active in the samizdat underground, many of his poems became popular only posthumously, when set to music and performed by his son: “let the silvery bass carved out of the moon / run before you / lighting the water’s way . . . / I won’t follow at Your heels / I’ll shut my eyes like falling leaves / I will not see / when the tracks’ leaves fall / from the time-worn branches of the paths.”

In contrast, Ivan Malkovych has been hailed as a “phenomenon” of “new wave” poetics. It is from his poem “An Evening (Goose) Pastoral,” in keen translation by Michael M. Naydan, that the title of this volume derives: “it’s as though the geese / are small bundles of the white chalk of days— / God’s big bottles walking to the white . . .”

Taras Prokhasko is represented by excerpts from his publication FM Galicia. It consists of three-minute diary-style fragments based on the author’s experience working at a newly created Ukrainian FM radio station—a startlingly free-form project that may not even be possible anymore in today’s Ukraine.

The White Chalk of Days is notably concentrated. A generous introduction by series organizer and editor Mark Andryczyk
helps situate works in recent Ukrainian literary history, and fresh translations add to the high caliber of this book. Yet to appreciate each chapter fully, one should really visit the webcast recaps of the Wilson Center online, to hear the expansive, greatly informative introductions there. Even so, far more than a record of the reading series, this book stands as a notable contribution to appreciating major currents in Ukrainian literature of the last generation—an appreciation that, for most of us, is notably overdue.