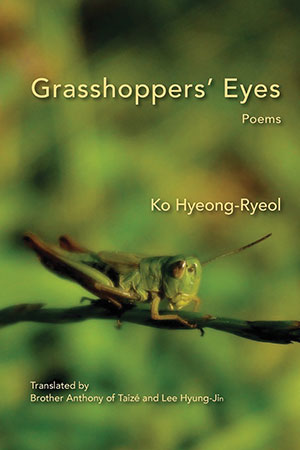 In the short introduction to Grasshopppers’ Eyes, the book’s translators assert a “Buddhist influence underlying [Ko’s] vision of existence. [These are poems] located at the intersection of being and non-being, illusion and reality,” where that which is inchoate can be at least partly revealed. Addressing a passing cricket, Ko avows, “I want to see, want to touch your name,” while elsewhere gazing uncannily at the “strange man in the mirror.” These poems stake out places at once familiar and meditatively defamiliarized, but this poet who claims to have been “born into this world innumerable times” also understands a phenomenological role for poetry, in which linguistic inventions can open new vistas where “Word was not word till now.”

In spaces where the poet can spend “a night in an aeon” and “starlight melt[s] like ice,” Ko poses a question that perhaps defines his poetics: “might I be able to say / whether it’s imagination or not?” The same rhetorical question seems imbricated in the texture of each poem within Grasshoppers’ Eyes, and the anthropomorphized mountains, waterfalls, birds, bees, grasses, seas, etc. are predisposed to talk together throughout this book, engaging the poet directly in their conversations. An evening “visits the sky,” and together “they gossip about the bellflower’s love affairs” as if the intersubjective chatter springs beyond that which human language can know, beyond the always-already social strictures and codified structures of “the human flower” and into confabulatory spheres where “another kind of existence” is witnessed.

From these vantage points, the poet casts a glance and asks, impossibly, “Blue mountain, what is man and what is living?” In places where Ko walks “with a painless, clear head in the morning shadow of a Seoul skyscraper” before revealing (perhaps associatively) a cicada “crying inside a tooth,” the poet demonstrates a style that essentially “mock[s] and refuse[s] the conventional beauties of lyric verse.” At the heart of this book there lies a probing ostranenie, Ko’s oeuvre releasing readers from the confines of merely human logic. The inventions and epiphanies within Grasshoppers’ Eyes are partly surreal, partly mystical, and wholly a reimagining of the possibilities of human apprehension.