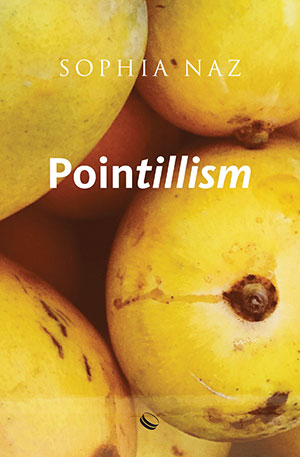 Sophia Naz walks a tightrope between two languages, English and Urdu, and her new collection of poems, Pointillism, is a pointer to that. Point is an English word and tillism an Urdu one denoting a talisman. “It signifies poetry as holding a magic power to both evoke and transcend linear time and perceived reality,” she says. But later we read in the poem “Pointillism” about an actual Point, which is an Indian military pellet gun pointed at the people of Kashmir, and a tillism to ward off the pellets in the form of voodoo words “to impale at penpoint the lifelong timelines of lies.” The poem, thus, marks an ongoing real struggle as a clash of two languages.

Naz’s poems are well-crafted pieces that cleverly hide within them this dichotomy of language and culture. “Names of birds” never uses English names for them and ends with these intriguing lines: “Hamsa/Soham / Repeat this / Until the bird / And its meanings / Are merged as One.” In Vedic literature, this combination of two words, So’ham and Hamsa, is interpreted as “I myself am the Swan,” the swan symbolizing the supreme state of being.

In a poem addressed to another poet, Agha Shahid Ali, she asks, “Shahid, you said / never to write that / word ‘soul’ so, how to explain / porous anatomy, that atomic stinging?” Naz deals with words in this metaphysical way and makes the lack of a clear-cut center or a well-defined home a constant refrain. Thus, even with a mundane object like an onion, she is able to say “lunar onions are just homeless tears waiting for the eyes to take them in.” Elsewhere she reflects, “Are we not all thumbnails / Filed away and forgotten / Under Time’s thumb?”

In “Chappan Churri’ (Fifty six stabs), the word churri (knife) is autocorrected to cherry, Cheri, and “occasionally, chai.” “When I type / churri, autocorrect is also / a stab at language.” Thus, she considers herself stabbed fifty-six times like the woman in the story stabbed by her jilted lover.

But “each wound gives her a new mouth,” and that’s Sophia Naz’s strength.