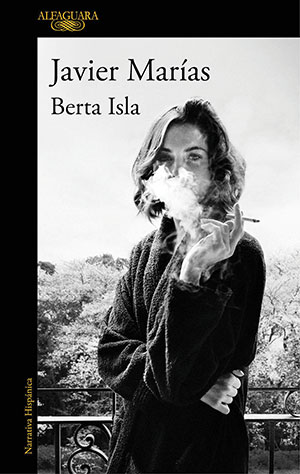 In his latest novel, Berta Isla, Spanish writer Javier Marías delivers an intense, emotionally charged story based on what, at first sight, could be labeled as a story of love and espionage. Set between Madrid and London, the novel tells the story of Berta, a Spanish woman who for twenty-one years (more precisely, between 1969 and 1990) awaits the return home of Tomás (or Tom) Nevinson, her Spanish-British husband. Both characters first fall in love as youngsters while in high school, but once they are married, Tomás’s schooling will take him to Oxford for a doctoral degree in foreign languages. A stellar student, whose learning of Spanish and English began naturally at home in Madrid, Tomás soon becomes an admired polyglot by his professors at Oxford. Upon graduation, because of his great ability to speak many languages and imitate many accents, he is recruited by the British secret service and thus begins his life as an underground agent.

As is the case with many of Marías’s protagonists, Tomás, or Tom, is an individual of many identities. Truly multicultural and multilingual, he can claim more than one place of belonging while also being perfectly capable of feeling at ease in more than one cultural setting. Such a trait proves to be useful for his job, although he is never free to reveal his many identities or his whereabouts to his wife; instead, he is forced to create many masks for himself in order to justify his long periods away from home. As a result, identity and deceit take center stage in this narrative along with other recurring topics in Marías’s fiction.

Case in point are the trials and tribulations of love and marriage and, more importantly, the hidden secrets each individual carries during his or her lifetime. At the same time, Berta Isla is a subtle reflection on the nature of fiction and the novel’s ability to serve as a tool to explore the many nuances of human nature. Marías’s intense, sentimentally charged narrative seems to underscore that only the art of the novel is capable of making visible facets of the human condition that seem invisible to the common eye. Moreover, literature is the only tool available for unveiling what lies dormant in our most hidden emotions and our many masks and desires.

An ambitious work filled with mysterious and sublime moments, Berta Isla is a rich and complex novel and can be regarded as some of Javier Marías’s best storytelling to date.