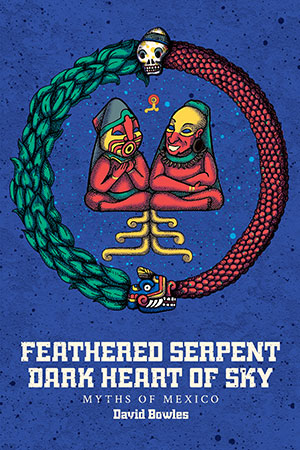 We are always revisiting our myths. In Europe and America, attention to myth has historically bolstered claims to national and (white) racial greatness by drawing on the heritage of the robust mythic and folkloric traditions of Ireland, Scandinavia, France, Germany, Russia, and others transmitted orally and written down in epics and sagas, or penned by the fairy-tale collectors of the sixteenth through nineteenth centuries. Today, a vast field spanning both popular and literary fiction attends to continued retellings, pastiches, and subversions of the Euro-American myths; most recently, Neil Gaiman and Philip Pullman won acclaim for their retellings of Norse mythology and the Grimm brothers’ fairy tales. Rarely, outside of Pantheon’s uneven Fairy Tale and Folklore Library, have the mythofolkloric traditions of Africa, Asia, Australia, and the indigenous Americas been given similar treatment.

Enter David Bowles, Mexican American novelist and translator of Nahuatl and Mayan. Feathered Serpent, Dark Heart of Sky is the most recent of Bowles’s several books that bring the folktales, myths, and poetry of Mesoamerican cultures to anglophone and hispanophone readers. With Feathered Serpent, Bowles has given us a rich, vast, and complexly woven tapestry of the heritage of stories that circulated in pre-Conquest Mexico. It is a compulsively readable account of the history of the “sea-ringed world” of Mexico from the formation of the very first entity, the dual god Ometeotl, out of the eternal life force of the universe, down through the creation of the many generations of gods and the four ages of human beings (all destroyed by infighting among the gods), and to the present of the fifth age of humans molded by Feathered Serpent, Divine Mother, and the many gods from the ground bones of the humans who came before. A masterful storyteller, Bowles packs the richness of the Mesoamerican cosmos into every sentence, bringing to vivid life ancient characters who are by turns funny, heartbreaking, lovable, grotesque, and venerable.

The book divides its history of the universe into seven sections that narrate the epochs of Mexico up to the conquest. The first three are cosmogony: how the gods and the order of things came to be, including a wealth of etiologies, from ultimate concerns with the purpose of human and animal sacrifice or the sanctity behind sacred sites; to natural and animal phenomena, like animal morphologies and habits; and the ordering of time, causes of eclipses, or spots on the moon (these caused by Feathered Serpent hurling a rabbit at the moon). At the heart of the story of the gods is the conflict between Feathered Serpent, creator and protector of humankind, and his brother, Heart of Sky (Hurricane/Tezcatlipoca), a tortured, jealous deity who seeks to destroy the people of Mexico in every age.

The final four sections tell of the human world, the world after the “Reign of the Demigods” and the exploits of great heroes, like the trickster Lord Opossum, Maya twins Hunahpu and Xbalanque, Mixtec archer Yacoñooy, and Aztec warrior
Huitzilopochtli. These sections narrate the rise and fall of the Toltecs, the Maya, and the Aztecs, concluding in the final portion of the book with the coming of Hernan Cortés, which Bowles recognizes as the final triumph of Heart of Sky in his battle against Feathered Serpent and Mexico’s people. Yet all is not lost; at the end of the time of myth emerge new peoples of “palimpsest souls”: Mexicans, Mexican Americans, Chicanos.

More than a compelling work of narrative art, Feathered Serpent is a project in restoring and forging a mythohistorical identity for contemporary Mexican and Mexican American peoples from whom these stories were taken by the ravages of Spanish conquest, which included the burning of nearly all manuscripts recording Mexican mythologies. Bowles’s genre-defying book translates, recovers, retells, and pastiches histories and myths largely lost in the wake of colonialism. Here is the Mexican approximate of the Greeks’ Theogony, Iliad, and Odyssey, the Malinke’s Sundiata, the Hindus’ Ramayana, the Babylonians’ Enûma Eliš—a singular work of art, yet in conversation with the many voices who, over centuries, shared the stories that Bowles sutures into one. He offers new, engaging translations and retellings of scenes from what few sources remain, including Aztec codices, the Mayan Popol Vuh and Songs of Dzitbalché, and oral and folkloric traditions from a range of Mexican cultures, producing a mythic chronicle of Mexico that draws on Cora, Huichol, Maya, Mazatec, Mixtec, Nahua, and Otomi storytelling.

Feathered Serpent is a significant work toward the recovery of a pre-Columbian episteme of Mexico, arguing for an ethical relationship between humans and the cosmos, since it is humans’ good deeds (and sacrifices) that keep Xiuhtecuhtli (time and fire god) and Nanahuatzin (the sun) in motion. The prose is artful, often playful, leading the reader through worlds and times she will want to read more of. It is a needed infusion of teotl, of vital life force, into the study and circulation of world mythologies today. Bowles’s Feathered Serpent, Dark Heart of Sky will be crucial to Mesoamerican literary and cultural studies as well as important to Mexican and Mexican American rediscoveries of effaced pasts, for many years to come. Scholars and readers of mythology and folklore: add this to the classics.