Heavens on Earth by Carmen Boullosa 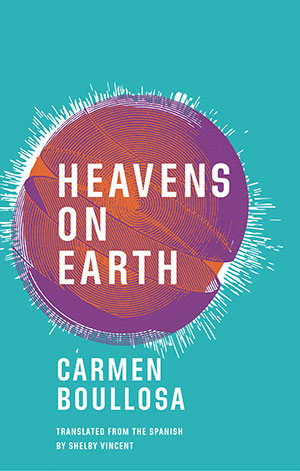 “This book is composed of three different narratives. For reasons that I do not understand, it was given to me to turn into a novel.” These words of a fictitious author open Carmen Boullosa’s 1997 novel Heavens on Earth. Published five years after the quincentenary of Columbus’s “discovery” of Nueva-España, its main voice is that of Hernando, a sixteenth-century Franciscan monk during the early years of the Spanish invasion of his native Mexico. His memoirs are then rediscovered in present-day Mexico and translated from Latin into Spanish by Estela. Learo, the last of the three, is an archaeologist. Living in a postapocalyptic future, he discovers Estela’s translations.

Boullosa’s ambitious, many-layered construct follows clear themes. All three narrators are translators and chronologists or historians, all facing the imminent destruction of their world. Hernando is witness to the slow death of his pre-Columbian culture and people. Estela, much like Boullosa, seems to sense a “beat of a destructive violence . . . in the air,” a sense that will ultimately culminate in the disintegration of her world into the dystopian future of Learo, who himself lives only to see the few other remaining humans abandon language and rapidly devolve into beasts.

Despite—or perhaps because of—all this structure (not even having mentioned the abundance of literary quotes, the author’s use of names—such as Lear or Ulises—pregnant with meaning, or the Esperanto opening and closing lines of each chapter), Boullosa’s book comes with one severe shortcoming: it finds little plot to cover its elaborate scaffolding. Through the inclusion of Estela, Boullosa ties the bleak realities of the other two worlds back to her own present. It is ironic that the author is at her best when she lets this minor voice recount what must be largely her own memories. The two actual protagonists, in contrast, remain less vivid. This is particularly true for Learo, who witnesses what might be the end of mankind purely from the outside. Living mostly through Hernando’s memoirs, Learo’s narrative takes up too many of the book’s almost four hundred pages, developing little momentum of its own. While Hernando’s memoirs do feature interesting individual passages, they never really connect to a plot that would make us truly care about their author.

Neither Learo’s repetitious outsider accounts of his fellow men nor Hernando’s somewhat scattered memories keep the promise of Boullosa’s ambitious structure and form. In a good novel, the author disappears behind her story. In Heavens on Earth, the framing too often reveals itself beneath the novel’s thin layer of plot.