Ambiguity Machines and Other Stories by Vandana Singh 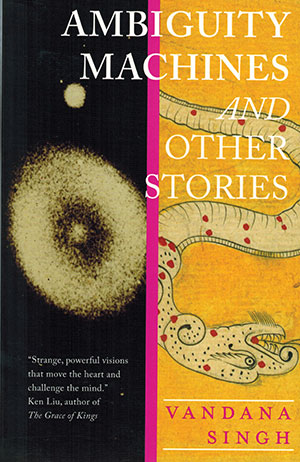 At once lyrical and experimental, stunningly original and deeply rooted in myth, the stories that make up Ambiguity Machines and Other Stories underscore Vandanah Singh’s position as one of the most accomplished and interesting writers of speculative fiction working today.

While collections of short stories and novellas tend to be uneven, Singh’s is simply one tour de force after another. Characters move through time, between dimensions, around the galaxy, and beyond. Consciousnesses of long-dead queens and Indian poets come alive again in twenty-first-century organic and artificial brains. Stories are folded within stories, and readers can find themselves happily lost in a forest of moving imagery and unexpected connections. Singh skillfully brings together the stories and traditions of her native India with the latest in theoretical and experimental physics to produce unforgettable characters.

It is the title story, however, that stands as the most ambitious and intriguing of the collection, for “Ambiguity Machines: An Examination” is structured as an exam for “intrepid explorers venturing into Conceptual Machine-Space, which is the abstract space of all possible machines.” They are given three scenarios, each of which includes “machines that do not and cannot exist.” In the first scenario, a Mongolian engineer builds a machine that allows him to see his beloved’s face, but at the price of a universe without boundaries. The second tells of a courtyard next to a church in Italy that, if traversed a certain way, can transport someone through time and space. And finally, a young archaeologist from Mali discovers a strange device that allows the members of a small village to merge mentally and perhaps even physically with one another.

Through the complexities of physics and the wisdom of ancient stories, Singh breathes new life into the themes of loneliness, kinship, love, curiosity, and the thirst for knowledge. Ambiguity Machines and Other Stories is a literary gift for us all.