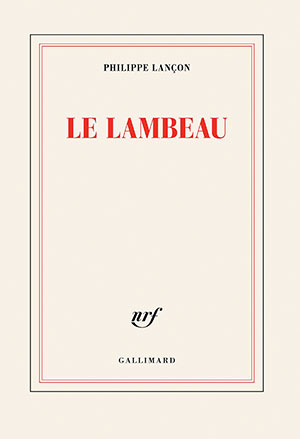 Philippe Lançon was shot in the face and left for dead during the January 7, 2015, jihadi terrorist attack in Paris that targeted the journalists and cartoonists of the satirical magazine Charlie Hebdo. Only one chapter of this book is devoted to the attack, during which twelve people were killed and eleven wounded. Le Lambeau (the “shred” or “scrap”—in this case, the surgical flap of skin) mainly chronicles the reconstruction of Lançon’s face and life. Much of the narrative is devoted to the daily routine and medical procedures in Parisian hospitals, including the famous Les Invalides.

Lançon initially stayed in a hospital wing reserved for victims of major physical trauma. Unlike most of the patients, he was kept under police protection, a belated administrative decision whose irony does not escape the heavily bandaged author, as he is wheeled around the hospital hallways and grounds. Keenly aware of how differently he is suddenly perceived by others, Lançon frequently alludes to his altered appearance with a mixture of willful dignity and residual vanity. He describes the reactions of family and friends when they first saw what was left of the lower part of his face and how it evolved over the course of multiple surgeries. The author aptly compares himself with the gueules cassées (broken faces) of World War I, when reconstructive facial surgery became a major medical concern.

Due to the extent of his injuries and the uncommon length of his hospital stays, Lançon became well versed in surgical procedures and terminology. He speaks frankly about the multiple humiliations brought about by his condition and about the need to relearn how to do simple things that he previously took for granted, such as speaking and eating. He also admits that he ended up afraid to leave the hospital environment, which had perversely become safe and familiar. Going back to his apartment in Paris and resuming a normal life had thus become a challenge.

Overall, Le Lambeau is a fascinating and often sobering read, one that offers insight into human fragility as well as resilience. One caveat in terms of style: like many French journalists/novelists, Lançon feels the need to insert as many literary references as possible into his narrative, with results that are often more rambling than Proustian. Some judicious editing would have eliminated a few of the unnecessary digressions and provided a sharper, clearer focus. It should be noted that two other survivors of the terrorist attack have published bandes dessinées or graphic albums: Catharsis, by Luz (Futuropolis, 2015), and La légèreté, by Catherine Meurisse (Dargaud, 2016).