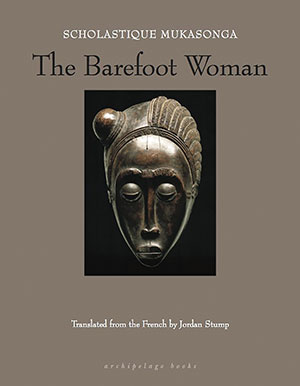 The Barefoot Woman is a living-record document, the voice of culture, tradition, and hope as well as a representation of the history lived by a group of Tutsi during the Rwandan genocide. It is a great performance where language has the stage, where words are revered and carefully chosen. Scholastique Mukasonga focuses her authorial lens on a historical segment isolated from within a kaleidoscope of major events. She brings forth the history lived and suffered by her people who are forced to abandon their homes. They endure the process of relocation and invest their energy into new places with fewer resources and the fear of death knocking at their door.

The place that fear has in the written account is not firsthand, yet fear is made of everything and flows everywhere: in the plans the mother makes to protect her children from soldiers’ raids; in the desperate thoughts that haunt the mothers of boys thinking the little ones will not come back; in the demands for burial a mother shares with her two young children. Fear is at its utmost power as death takes extreme forms.

The balance is kept through careful consideration of all the options of the displaced peoples living in the Tipoli homes. Words are presented, announced, and revealed as the author seems to whisper them to us through the lines. Then, the architecture of a refugee home is extended to represent a traditional home on a smaller scale by using space extensions that amass places of quietness, peace, and the sacred. The mother’s house extends with a garden as gathering place as well as herbal pharmacy. Lastly, the garden unrolls a story of resistance, recollection, and hope with the pious importance, enchantment, and reverence given to the sorghum seed: the seed used to purify a single mother or start wedding rituals. Now, the world is halted. Plants are no longer a mass of abundance—they represent, in scarcity, the essence of survival.

This memoir opens the door to a simpler way of life that continues to resist displacement and genocide by raising pillars made out of homes, gardens, and the others in the community who make the fascinating rhythm of resistance absorb fear through creativity and hope.