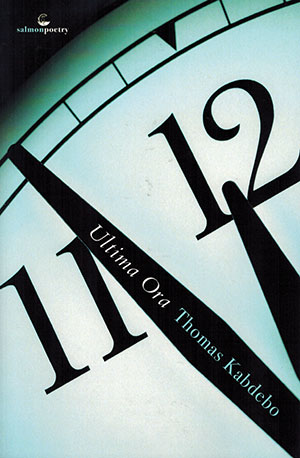 Most of the poems in Ultima Ora are brief, sometimes epigrammatic, sometimes anecdotal. In the best of them, the brevity belies a depth, which Thomas Kabdebo opens to the reader through provocative and vivid imagery and through succinct allusion to mythology and the sacred.

The volume begins with Homer sitting on a stone by the shore while his own character, Odysseus, “was about / gathering baits for him.” There is something fascinating about the attempt to pack the majesty of the Odyssey into a mere four lines detailing such a seemingly private moment, as if the poet has energized his epigram by tensely packing into it an epic that threatens to break out.

In “Awakening,” Kabdebo turns to Aztec mythology, describing the Tlaloques who aid the sky god and bring the rain “like the priests of the idols with long hair.” In “Questions,” he asks the reader if we know how it feels to “live like a tree conscious of the woods,” evoking the motif of the living tree found in mythologies from around the world. Like a Dutch master, Kabdebo has a knack for suggesting great depths of shadow with a few brush strokes.

Unfortunately, he does not always choose to do so, and some of the poems in Ultima Ora come across as flippant or even lazy. It is hard to know, for instance, what to think of a poem like “Jutka,” which reads in its entirety: “because Lollobrigida / is not in town,” and another allusion to the Odyssey does not save “Nausikaa, who was she?” from bathos when the answer turns out to be “a moll – a woman / not a guy, / my butterfly!” Frivolity is a fine thing in a poem, but there is a world of difference between the artful frivolity of an epigram by Martial or a lunch poem by O’Hara and the kind of mere inattention of which Kabdebo is occasionally guilty.

Yet the book is, on balance, well worth reading and includes several poems of profound vision, especially the award-winning “Christ,” which probes the depths of the mysterious union of body and spirit, doubt and faith. The book’s title and tone give one the sense of a career nearing its end, but let’s hope the volume serves as an introduction for many readers to an usually thoughtful and artful poet.