The War on Normal People: The Truth about America's Disappearing Jobs and Why Universal Basic Income Is Our Future by Andrew Yang 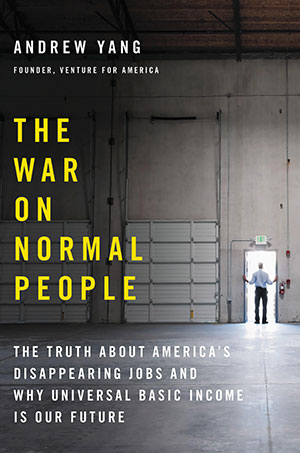 The case for universal basic income (UBI)—whereby the state makes regular, unconditional income payments to all its working-age citizens—is gaining increasing traction in the United States. Though the concept of UBI is nothing new to American politics, it has acquired renewed relevance in the face of a pressing modern issue: the automation of jobs. Andrew Yang makes one of the more noteworthy arguments in favor of UBI in his urgent new book, The War on Normal People. Yang is clearly a man of action. He is the founder of Venture for America and has recently filed for candidacy in the 2020 US presidential elections. With The War on Normal People, he not only draws attention to current socioeconomic issues but goes on to proposes concrete measures to face them.

Yang uses the word “normal” in the sense of “average” but reminds his readers that the “average” falls lower than they might think. As Yang points out, “the normal American did not graduate from college and doesn’t have an associate’s degree. He or she perhaps attended college for one year or graduated high school [and] has a net worth of . . . about $6K excluding home and vehicle equity.” It is these “normal” Americans for whom the consequences of shifting from human to machine labor have been and will be most dire. Although “automation [has already] eliminated millions of manufacturing jobs between 2000 and 2015,” Yang believes that the bulk of its impact is yet to come: “I love capitalism[, but] capitalism with the assistance of technology is about to turn on normal people.”

However, to think that high-qualification white-collar jobs are immune to this change would be mistaken. The key criterion for the automation of a profession is the extent to which that profession is repetitive or routine, not the extent to which it is manual. Considering that the Federal Reserve classifies almost half of current US jobs as “routine,” Yang contends that the potential impact of continued automation is serious indeed. Yang sees as misguided in the current context the claim that technological revolutions always compensated loss of certain professions by the creation of new fields of employment. A number of specific manual professions becoming obsolete does not compare in quality or impact to any (including any new) routine work being lost to human employment. “History repeats itself until it doesn’t,” he cautions.

As a solution to the socioeconomic vulnerability that would result from increasing automation, Yang proposes to pay a universal basic income, whereby each working-age adult is to receive a “Freedom Dividend” of $1,000 a month, which roughly hits the current national poverty line. To gauge the impact of his proposal, he lists a multitude of current and historical UBI experiments (from Alaska and Finland to UBI aid payments in Kenya), which seem to all offer similarly positive conclusions. For instance, in the Canadian town of Dauphin, thirteen thousand people received a four-year UBI, lifting everyone above the poverty line, with researchers finding “minimal effect on work. The only groups who worked substantially less were new mothers and teenagers. . . . Birth rates for women under twenty-five dropped. High school graduation rates went up . . . hospital visits went down. . . . Domestic violence went down as did mental illness.”

Yang, however, spends little time scrutinizing how outcomes of these local experiments, mostly conducted on culturally homogeneous groups, would scale up to the national level. He also fails to discuss the performance of existing national (notably the earned income-tax credit) and foreign poverty-reduction programs. Much less does he weigh such experience against his own proposal. Lastly, in his discussion of UBI, he does not consider any variants of negative income tax for low-income brackets, a UBI-like instrument favored by American conservatives around Richard Nixon and Milton Friedman in the late 1960s and early 1970s.

The cost of Yang’s freedom dividend is put at “about an additional $1.3 trillion per year on top of existing welfare programs.” This might seem rather small compared to the size of the overall US economy, which weighs in at about $19 trillion per year. But it is far from negligible when compared to the current annual federal budget of just over $4 trillion. Yang wants to fund these costs by raising the value-added tax (VAT) to about half the European level and cites a study by the Roosevelt Institute, which estimates that “$12,000 per year per adult . . . would permanently grow the economy by 12.56 to 13.10 percent,” making his plan effectively self-funding. Notably, he does not discuss any study critical of the macroeconomic impact of his proposal.

Alongside its costs, the second standard argument against UBI is the reduced incentive to take employment and the supposed connected deprivation of meaning that work provides. Yang, backed by the aforementioned number of UBI experiments, is skeptical of how far receiving poverty-line benefits really reduces the work incentive and how much meaning some jobs really give. He does, however, fully concede the plethora of negative effects correlated with unemployment and offers his vision of “Human Capitalism” in response. At the core of this idea lies a “new currency—Digital Social Credits[—which] would reward people for doing things that serve the community.” He thinks of these social credits as effectively representing “time as the new money.” Parenting, teaching, volunteering, writing—Yang suggests many important activities dramatically undervalued by current markets, which are to fall under this additional regime of remuneration.

It is easy to be skeptical or even dismissive of Yang’s proposal for a freedom dividend paired with a social credit system. Yet regardless of how one might view his solution, the threat of automation still stands. There are many elements of UBI that are promising, not least its simplicity and minimal administration needs, which promise to increase transparency and equality in the distribution of state subsidies. Ultimately, what forms of new or existing subsidies will prove most effective is not going to get decided by argument but by action. We must grow bolder and broader in what we try. A version of UBI might very well be a necessary component to what we end up shaping as our answer to the momentous changes brought on by the continued growth of machine labor. But no matter if or how we choose to pursue UBI, even its most stalwart proponents must recognize—as Yang does—that UBI alone cannot be the magic spell that cures all society’s ailments. Fundamental challenges such as access to health care and education would remain similarly pressing with UBI, as they are now.

When following the challenges Yang discusses, we might feel as one of his friends did, “like I’m getting punched in the face repeatedly.” However, Yang equally manages to convey an incredible sense of community. It feels like we are in this together, and there might just be a way out.