The Rise of the African Novel: Politics of Language, Identity, and Ownership by Mukoma Wa Ngugi 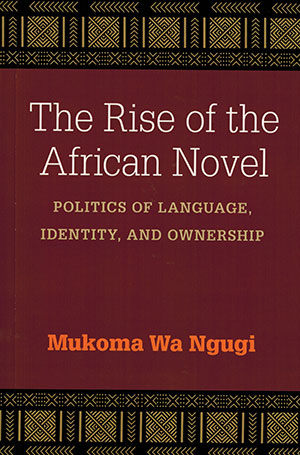 Mukoma Wa Ngugi’s bracing text diagnoses an identity crisis in African literature, its source the English Metaphysical Empire (EME), which, perpetuated through colonial and neocolonial educational and governmental systems, led African literary historians to replace the actual origins of African literature with the later Makerere generation. Tracing the political and ideological forces that effected this outcome and measuring its cost to African writers severed from their forefathers, Ngugi envisions a properly rooted literary tradition that encompasses the breadth and depth of African literature.

The new literary tree would comprise three branches: the pre-Makerere South African writers (e.g., Mofolo, Jordan, Plaatje [the first black African to produce a novel in English, Mhudi, 1930]), who published chiefly in indigenous languages later translated into English; the Makerere, named for the 1962 conference that assembled them (e.g., Achebe, Ngũgĩ, Soyinka), who chose the realist political novel in English as a tool to unify indigenous elites against colonizers and critique neocolonialism’s “national bourgeoisie”; and the post-Makerere (e.g., Adichie, Bulawayo, Forna), who portray, in English no longer chosen but internalized, what displaced Africans face within today’s global transnationalism.

Ngugi’s cogent evidence demonstrates that the EME and EME-educated national bourgeoisies—Fanon’s black skins in white masks—subjected all African culture producers to colonial binaries that privileged Western aesthetic norms. Thus, the chapter “Amos Tutuola: Creating the African Literary Bogeyman” reveals that the West championed Tutuola’s The Palm-Wine Drinkard (1952) as a quaint anthropological text by a half-educated indigene. In fact, when Tutuola asked his editors to correct his flawed English, they declined, preferring to market the more “authentic” original as an entrée into the “African mind.” Stereotyped as the colorful but always inferior African, Tutuola drew hostility from African literary historians and critics: their internalized Western standards obliged them to label him a “cul-de-sac.” The Makerere, meanwhile, whose canonized novels and prizes, including Soyinka’s 1986 Nobel, earned them membership in the EME (which later, through “Commonwealth Literature,” would seek to appropriate canonical postcolonial writing in English), distanced themselves from Tutuola, excluding him from their conference.

This dynamic underlies the erasure to which Ngugi points. Showing allegiance to EME values, EME-indoctrinated African historians and critics categorized the pre-Makerere, barred from the EME because they used indigenous languages, as a bridge from African orature, which the EME considered a lesser form, to Western literature. As for Fanon’s “anticolonial artists,” the Makerere found the pre-apartheid synthetic visions of their South African forefathers politically inappropriate.

To resolve its identity crisis, Ngugi (whose father became a major voice on both sides of the dispute, writing canonical works first in English as James Ngugi, later in Kikuyu as Ngũgĩ wa Thiong’o) asks that African literature embrace colonial and indigenous languages, realist political and other novel forms, theater, poetry, science, the Black Atlantic, slave narratives, etc., all within a nonhierarchical structure. Aware that African journals and presses have begun to extend their linguistic and generic offerings but that most actors in cultural production still resist large structural changes, Ngugi ultimately invokes Achebe’s “Don’t fence me in,” calling for a “borderless” African literature that opens itself “to its past literary history, to its present rooted transnational state, and to a future where roots are everywhere and the center nowhere.”