Heroines from Abroad by Christine Marendon 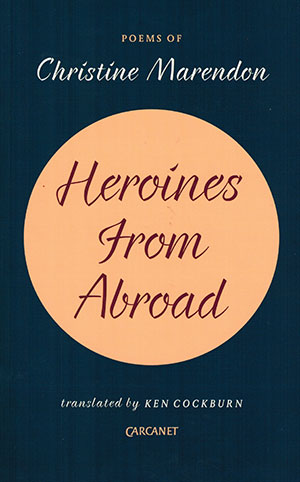 In 1909 anthropologist Arnold van Gennep introduced the concept of the “liminal period of ritual,” a transition located between separation and reassimilation. If we can agree that most humans’ separation from the animal, vegetable, and mineral worlds has already occurred and that we have not completely reassimilated into Earth’s abundance, then we are prepared to experience Christine Marendon’s Heroines from Abroad.

From the first poem, “After Rainfall,” in which the speaker wonders “whether humans stand on the other side” of the community of beings, to the last poem, “Terrestre,” where the speaker is “always . . . out here in the world checking co-ordinates,” this collection considers the liminal spaces—of dreams, of poetry, of fairy tales, of the subconscious, of our relationships to the planet and its beings. Instead of philosophizing about “returning to nature,” however, the poems in Heroines from Abroad document the perspectival shift necessary to the process of re-visioning our place in the world using striking imagery and “wyrd” equivalences. “Here’s my mouth in the reeds. And there. / My breath on the lake. One breaking wave and I’m / no longer I.” In “Occurrence,” human eyes are figured as flower buds.

The intentional collapse of life-form boundaries in this collection is sometimes seen in indigenous poetry, but Marendon’s approach is her own.

Heroines from Abroad documents a journey to an estranged place, which we nonetheless recognize through a poetry that is philosophically, psychologically, and emotionally transformative in a manner reminiscent of American philosopher Henry Bugbee’s The Inward Morning. Perhaps, though, its effect is best described in the poem “Alba” (which references Celan’s “Est is alles anders”): “Much resonates, / shifts the half-formed things in space where it’s all foretold / right at the start.” It is a compelling collection—one that readers will return to and will return to readers in dreams and contemplation.