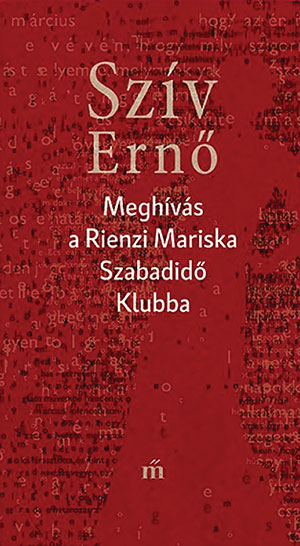 Ernö Szív is the pseudonym of László Darvasi, one of Hungary’s best fiction writers. Darvasi has published over two dozen books under his name, intermittently with the “Ernö Szív” stories, the genre of the latter being short humorous sketches and satirical feuilletons. These are regularly published in the Budapest cultural weekly Élet és irodalom, so most pieces in the present collection (the fifth in the “Szív” series) with the mysterious title Meghívás a Rienzi Mariska Szabadidö Klubba (Invitation to the Marishka Rienzi Leisure Centre) must already be familiar to Hungarian readers. Still, it is to the credit of the publisher that it has brought out this thin volume collecting Darvasi-Szív’s best writing of recent years.

From the beginning, Ernö Szív sets out an ambitious task for himself: to write the story of the Hungarians from the conquest of the ninth century to the present day. This enterprise is partly accomplished in the first of the stories, entitled “Verecke, aprópénz,” where the first word stands as a symbol of the Carpathian basin of 896 and the second is how the inheritance of the original ten Magyar tribes has been plundered and converted into small change. According to Szív, ”They [the Magyars] will cheat for a thousand years. And steal. From everyone, be the person dead or alive. They will tell lies. And keep silent. They do not learn from history, just keep fibbing about it.”

This bitter self-criticism is mitigated by the fact that, according to Szív, most Hungarians are “poets” or at least versifiers who try their hand at poetry. Holding up a distorting mirror works not only collectively but also in the case of well-known Hungarian poets of the past century: a large part of the book consists of witty monologues of misunderstood wives and imaginary or real lovers of such poets and writers as Endre Ady, Dezsö Kosztolányi, and Gyula Juhász. The “Marishka Rienzi” of the title is not a famous Italian diva but the demonic prostitute-lover of the young Ady at Nagyvárad (today, Oradea in Romania) who most likely infected him with a venereal disease. Among these sketches, “Anna Sárvári” is a remarkable evocation of the difference between poetry and reality, but it is definitely no material for an official textbook of Hungarian literature.

Szív’s style is rather different from that of Darvasi’s. It is sarcastically laconic, often poetic in its denseness. In many of his sketches, an adjective or a verb is enough to create a specific atmosphere. In this respect, “Ernö Szív” is a successor of Dezsö Kosztolányi, outstanding poet and writer of the Nyugat generation in the early twentieth century. Another trait of Szív that links him with Kosztolányi is his capacity to assume different roles. This makes the piece “Fegyverbolt sztori” (Arms store story) particularly poignant, even if we do not know that this particular shop is located in San Diego, California, where the internationally known Hungarian writer Sándor Márai lived out his life.

The last story in this collection is entitled “When the Hungarians Are Leaving,” and while its narrative verges on the absurd, it highlights a real problem affecting present-day ”illiberal,” autocratic Hungary: most young people leave the country for better-paying jobs abroad, and government policy is not to replace them with refugees from less fortunate countries. Ernö Szív hopes that some leavers will eventually come back to this “empty, plundered” land, but, at the moment, it is still impossible to see the light at the end of the tunnel.