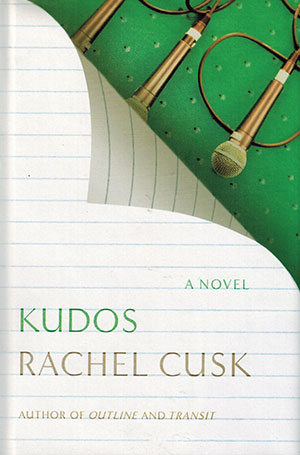 In Kudos, Rachel Cusk continues to reinvent the genre of autofiction, seamlessly merging life and art. In this eagerly anticipated conclusion to her trilogy, which also includes Outline (2015) and Transit (2017), her narrator, Faye, provides the frame for stories narrated by people she meets at home and abroad. While Outline is set at a weeklong creative-writing class in Greece, and Transit concerns the renovation of a run-down property in London, in Kudos Faye travels abroad to a writers’ conference to be interviewed about her latest novel.

The arc of Faye’s separation, divorce, and remarriage structures the three novels. In Kudos, women ask her how she could remarry, knowing what she knows. They recount their own struggles managing career, parenting, and relationships. Conversations flow naturally, with confessions so raw they appear to occur, one listener notes, “without the screen of fiction.” A journalist tells Faye that in her novels she keeps her imagination well hidden. But then, as he admits, all art requires subterfuge. “There is no better hiding place than somewhere as close as possible to the truth, something all good liars know.”

Cusk’s trilogy openly addresses this question of authenticity, since she freely uses material drawn from her life. On an airplane on her way to the conference she listens to her seatmate reveal startling details about his family that he has obviously described to others before. His narrative is familiar enough to him that he no longer feels its sting. Faye thinks, “The skill, I saw, lay in skirting close enough to what appeared to be the truth without allowing what you actually felt about it to regain its power over you.” All art requires suffering, but the artist must feel separated from the suffering to depict it.

The brilliance of Cusk’s experiment with truth effectively blurs the line between author and narrator, private and public. Her translator explains why she takes such care with this fragile connection: “These experiences do not fully belong to reality and the evidence for them is a matter of one person’s word against another’s.” Only by being invisible, altering her true nature, can the author achieve self-revelation. By her questions, the narrator provokes others to do the same.