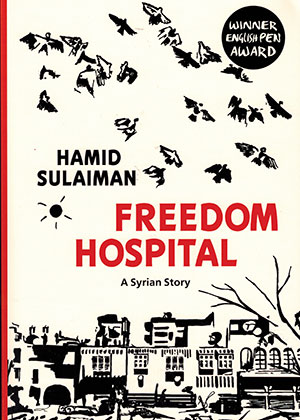 “Go on, pour,” Yasmin says as she has Abu Azab cauterize the leg of a rebel soldier with scalding hot oil after she has amputated it with a hacksaw in the middle of the street.

If you thought that a graphic novel about Syria called Freedom Hospital was going to be uplifting, Hamid Sulaiman’s book challenges you to think more deeply about what has happened there since 2012. The story moves from images of mutilated children and beheadings to love stories, soccer, and hallucinogens. True, at the narrative’s heart is the idealism of a woman, Yasmin, and her attempts to maintain a hospital in the fictional town of Houria (Freedom) under Bashar al-Assad’s regime in Syria during the civil war. But Sulaiman uses his narrative to show the complexity that accompanied Syria’s descent into chaos, as rival opponents of the Assad government turned on one another and civilians were caught in the middle: soldiers defect and then return to the regime, the rebel armies splinter and give birth to the Islamic State, and Russian-made weapons kill people on all sides. Sure, Assad’s regime comes out looking bad, but this is a more complicated critique of what happened to Syria than simply blaming the government. It is an attempt to come to grips with an overwhelming number of personal tragedies in a civil war.

If Freedom Hospital reads as chaotic and violent, that’s in part what Sulaiman is trying to communicate. As his postscript notes, “I don’t think anyone can capture exactly what is happening in Syria. . . . I chose to blend fiction and fact to avoid having to explain what was true or false.” The story reflects this in both its narrative and its images. It is difficult for characters to know who is on whose side or what is happening elsewhere. Fear of snipers, an airstrike sensed by a cat, and the shadowy faces and conversations in the blackness all communicate a sense of uncertainty and imminent danger from unknown sources.

There is no denying that there is something optimistic in the story of Freedom Hospital. Yasmin truly believes in her mission to help people. As events unfold throughout the story, however, it seems that Sulaiman shares the perspective of his main protagonist: “I’m neither a pessimist nor an optimist. I am a realist.”