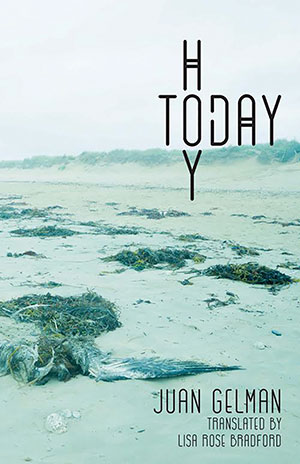 Recipient of the Cervantes Prize, Juan Gelman is best known for his activism, passion, and the tragic death of his son and daughter-in-law during Argentina’s dictatorship of the 1970s. Gelman lived in exile, and much of his life’s work dealt with themes of protest, loss, love, nostalgia, and his Ukrainian Jewish heritage. He gained fame with center-justified, unpunctuated poems that resemble the human body, the language emulating the breathless, panting recovery from almost drowning.

Today / Hoy is a surprising departure. Instead of resembling the living, suffering body, the 288 prose blocks consist of almost impenetrable juxtapositions. And yet, meanings blossom from the middle of the poems rather than from beginnings or endings. In CXXX, the “blossom” sentences appear in the middle: “That which is structured falls apart and only they take note. Ten different names for the rain filter through the clefts of a carnation.” Gelman addresses the nature of reality, perception, and language itself as they contribute to either an irreducible ambiguity or a liberated language that unleashes a multiplicity of possible meanings.

Gelman does not group the work into themes, topics, or narratives. Instead, he allows juxtapositions to create their own order and disorder. CLXXX explores how a word “viaja en sus negaciones y desastres” (travels in its negations and disasters). CLCVI plumbs expressionless sorrow; LXXXIX tellingly evokes the disassociations of torture as it paints a surrealistic vision of a tree bursting into song, a person rinsing the tears that grew in her hands. As a whole, the blocks construct an entire philosophy of being and knowledge.

It would be interesting to reorganize the prose poems of Today / Hoy into categories and a structure that clearly delineates different ways of describing the interior metamorphoses of language and knowledge. However, that is not the way that they are arranged in this collection. You, the reader, can turn the pages with a “residue of evil” (XCV) or simply contemplate the “incognitos del ser” (conundrums of being). And so, Gelman’s poems in Today / Hoy constitute a mosaic of unsettling emotional depth that illustrates the process of coming into knowledge while both unifying and fragmenting the self.