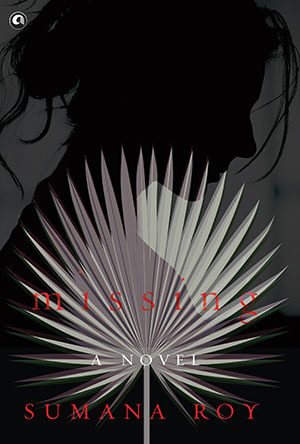 Missing, Sumana Roy’s first novel after her highly acclaimed first work of nonfiction, is a modern retelling of the oldest Hindu epic, the Ramayana. Will the present-day Sita, Kobita in the novel, meet the same fate? We will never know, as she remains missing through the entire novel. What we do know from the other characters’ reminiscences about her is that she is the one who is in charge. Her husband, Nayan, who is blind, depends on her for everything in the day-to-day business. Kobita is a social worker, too, and her concern for a young girl molested in the heart of Guwahati makes her pack her bags and go to a strife-torn and flood-ravaged Assam in search of the girl. Soon, it is Kobita herself who goes missing, as her phone calls to Nayan stop coming.

While the Ramayana was about bringing back Sita from the clutches of Ravana and the war that ensued, Missing portrays the internal war that goes on in Nayan, as he tries to come to terms with the feeling of missing his wife. The seven days narrated in the novel are filled with moments of despair, hope, anxiety, anger, and anticipation for Nayan. It doesn’t help that their son is far away in a foreign country and he is surrounded by people who have their own issues to deal with. The novel is peppered with clips from the daily newspaper, for which Nayan employs a young girl, and soon it becomes difficult to distinguish between news and fiction. In the age of “breaking news,” news has become stranger than fiction.

Missing is not a racy mystery novel, as some may assume from its title. One needs to read it slowly. Missing’s poetic tenor grows on you. Sumana Roy’s Missing reads like the name of its protagonist, Kobita, the Bengali word for a poem. The missing is not only physical but metaphorical, too.