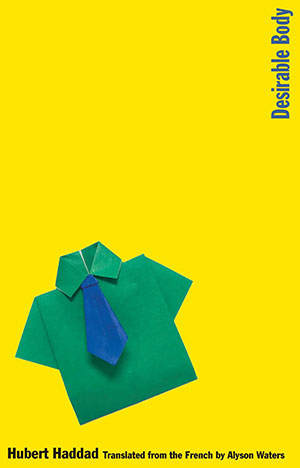 The notion of a modern Frankenstein is far from unique. With Desirable Body, however, Hubert Haddad crafts a mesmerizing and scientifically detailed account of such a concept with precise brevity. Spurred by the actual theories of an Italian physician in the last five years, Haddad examines the psychological implications of a “full-body transplant,” dissecting the institutions of agency and identity in the process.

The text traces the plight of Cédric, a journalist with a veiled past of unimaginable wealth and a penchant for illuminating the bane of Big Pharma. After a seemingly freak accident renders him paralyzed from the neck down, a bombastic surgeon, Dr. Cadavero, undertakes one of the most grotesque and meticulous procedures to attach the writer’s head to the healthy body of a biker. Unfortunately, as Cédric enters rehabilitation, the physiological success of the operation opens a floodgate of cognitive peril.

Haddad weaves complex scientific musings within eloquent descriptions of turmoil with ease. The writer’s use of detail is, ironically, never too clinical to veil or outright sabotage his narrative. This practice is exemplified in the chapters honing in on Swen, a fellow journalist enamored with Cédric and his partner, Lorna. The lengths of Swen’s obsession are interrupted by excerpts of the articles he scans, providing a subtle, objective frame to the darker action at hand.

Desirable Body’s prose breathes in tandem with the staggered pace of Cédric’s new and stirring vessel. The novel’s third movement is riddled with attempts at cohesion, and as the synapses of the protagonist’s nervous system retrigger, so too do the ramifications of polymerizing two individuals emerge. Some gratuitous moments feel a bit needless yet may earn their place in retrospect given the physiological intricacies of the narrative. As the text approaches its darkest epiphany, Cédric’s momentary cohesion begs to be brought back to a normalcy far removed.

Haddad’s work is terrifying without relying on horror conventions. Rather, it garners its momentum by simply cascading an idea as far as it can possibly tumble. It is a bit disingenuous to merely describe Desirable Body as a contemporary Frankenstein, as it is clearly something more.