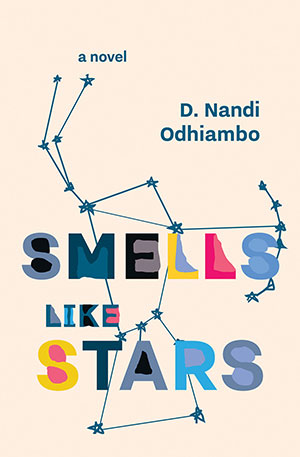 Part domestic drama, part investigative thriller, and all intersectionality, D. Nandi Odhiambo’s fourth novel foregrounds the tension of interracial and queer relationships against the backdrop of colonial legacy. The four characters in Smells Like Stars struggle to realize their dreams of love and success in Ogweyo’s Cove, a Pacific tourist haven.

Told through the eyes of an omniscient narrator, the Kenyan-born novelist’s story follows a two-week countdown to the wedding of Kerstin Ostheim, a journalist who investigates gruesome horse killings, and P. J. Banner, a photographer with a cocaine habit. After meeting on a dating app and seeing each other for six months, the middle-aged couple decide to get married. P. J. must learn to take responsibility and confront his denial and addiction in order to support Kerstin and Schuld, her transgender daughter from her first marriage, while Kerstin herself must navigate her family’s Nazi past and privileged position as a settler.

Sprinkled with Swahili and German, and awash in poetic description of place, Odhiambo creates a sensual world where witch doctors offer proverbs with matter-of-fact humor and mechanics find wisdom in Aristotle, only to be interrupted by tweets and text messages that join the flow of the narrative to bring the historical and the contemporary side by side.

These juxtapositions form the warp and weft of the novel. Consider the relationship between Kerstin and P. J., which parallels that between Schuld and her boyfriend, Woloff, an Olympic medalist struggling with a knee injury. Through these comparisons and connections, Odhiambo brings into stark relief various degrees of intergenerational trauma as each couple bumps against the ideals and norms of their elders. He shows us how violence is passed down and resonates in small, biting ways, creating a complexity and nuance that infuses the novel from beginning to end.

At times, Odhiambo’s grip on description is loose and digressive, foraying into detail that is heavy-handed, but ultimately, it serves to enrich the world of Ogweyo’s Cove, where “spotty pearls of sun peak through cracks in the foliage” alongside the rhythm of house music and East African slang like “bones” and “chop chop.”

Smells Like Stars is a timeless story of those who must fight for their love beyond all understanding, including their own. Taking hints from Zadie Smith’s NW, it is also a search for meaning in the face of oppression rooted in overlapping histories, upbringings, and families both given and chosen.