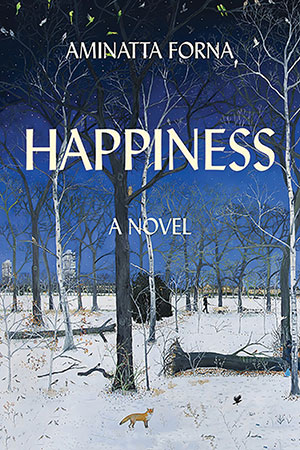 In writing workshops, I caution students against relying on coincidence to drive plot, as events that happen by chance are generally less interesting than those that develop out of a character’s desires or fears. Yet Aminatta Forna, in her resonant fourth novel, Happiness, successfully employs coincidence in service to broader thematic concerns with connectivity. In an opening sequence, Attila, a Ghanaian psychiatrist, collides with Jean, an American scientist, on Waterloo Bridge, distracted by a fox named Light Bright, whose behaviors Jean is tasked with observing as part of a study on urban foxes. With this meet-cute, Forna implies that even in a vast urban landscape like London, chance moments of significant connection are possible, even inevitable.

The slow-burn relationship that develops between Attila and Jean undergirds the novel, while Forna uses London’s vibrant ecosystem to examine the interconnectivity of living things: human, animal, and vegetal. Attila’s is the most compelling voice. An outsized man in both personality and professional stature, he moves through the world with a captivating surety, breaking into dance when the mood strikes, delivering a controversial keynote address questioning his colleagues’ interpretation of trauma’s effects on people.

Next to Attila’s natural magnetism, Jean’s quieter perspective is somewhat overshadowed. Her plight on behalf of the foxes she studies, as well as the backstory about her past relationships, lack the propulsion of Attila’s sections, which follow his efforts to locate the missing son of a relative as well as his work in conflict zones on behalf of the United Nations.

Still, Forna’s prose is so crystalline, her observations about the human condition so psychologically astute, that it is easy to forgive this slight unevenness. She also dares to make assertions that challenge her Western audience. Analyzing a countryman’s response to his kidnapping and detention at the hands of Iraqi militants, Attila says: “Our [Africans’] expectations of life . . . are more modest than the European’s. What I mean to say is that the script of life for most of us is, dare I say, a great deal more fluid . . . in other words, we know shit happens.”

In this way, Forna tweaks Western readers’ smug assumptions about universality, even while reaffirming our common humanity through Jean and Attila’s improbable love. The pleasures of the multilayered storytelling in Happiness are abundant, and the novel confirms that Aminatta Forna is a wise and subtle writer who delivers, time and again, stories that confront societal failings and celebrate the personal intimacies that redeem us. (Editorial note: Forna’s “Selective Empathy: Stories and the Power of Narrative” essay, published in the November 2017 issue of WLT, was nominated for a Pushcart Prize.)