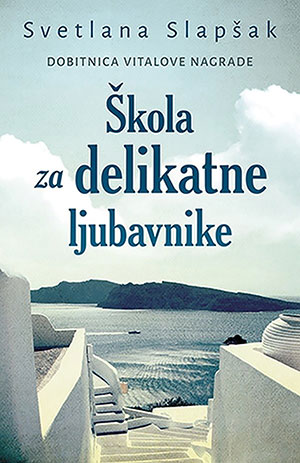 Svetlana Slapšak, an award-winning essayist and candidate for the Nobel Peace Prize in 2005, has followed up her acclaimed debut novel, Ravnoteža (Equilibrium, 2016), with Škola za delikatne ljubavnike (The school for delicate lovers).

The author took the title and the idea from the nineteenth-century French writer Rétif de la Bretonne, intensifying it with elements of Plato’s Phaedrus and her own experiences as a Yugoslav student in Greece during the 1970s. The story connects public and private dramas when a young girl from Yugoslavia, Nataša, stops a famous Soviet actor, Aleksej, from committing suicide close to the end of the Regime of the Colonels in 1974. Their frequent meetings transform into love, and their travels across Greece allow them to see the remains of different eras in history as well as reevaluate the politics of both small and large countries.

The novel is shaped as a diary that at the same time is a novel about love, historical-political fiction, travelogue, and philosophical dialogue. The arbitrary nature of a diary allows the interpolation of essayistic fragments and translated poems from Greek, French, and Russian, which, skillfully connected, become perfect additions to the main text. The author constructs the story around several key questions: What is love? What is the relationship between love, politics, and society? What is the value of political participation by individual citizens alone? Why is freedom of learning important?

Athens as “the magic mountain” and Greece, one of the main civilization centers, allow this renowned anthropologist to see time from multiple perspectives and to ask new questions about the freedom of different societies (Greece, SFR Yugoslavia, SSSR, the US, Czechoslovakia, and Poland, among others); about the relationship between culture, myth, and history; and about language and democracy. In these questions, Slapšak uses collage and free association, presenting interesting examples from theater, music, and film.

Readers who pick up this book for its travelogue qualities will enjoy the places depicted and appealing details that can rarely be found in travel guides. Those looking for a romance novel should respond to the progressive intimacy, characterized by both humor and sophisticated eroticism. The most demanding readers will love the exciting narrative, Slapšak’s haikulike concision in her descriptions of nature, the sharp-minded and rhythmically organized dialogues, all while continuosly discovering the importance of Plato’s Phaedrus and the rich knowledge of numerous intertextual and interarts connections. Škola za delikatne ljubavnike teaches love, which changes our private language and public speech, and offers a necessary contrast to ignorance and hate.