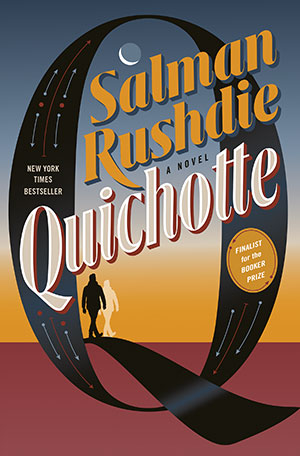 Salman Rushdie, the much-celebrated as well as vilified Indian-born British author of the novels Midnight’s Children and The Satanic Verses, among others, has come up with a firecracker of a new novel. Not one to pull a punch, Rushdie’s latest novel, Quichotte, foregrounds the ideals of ubiquitous love and tolerance in a world that is consistently veering toward hatred, exclusion, and intolerance.

Against the backdrop of rising hostility among and within nations as well as individuals, Rushdie endeavors to find a fine balance between history and fiction through a reinterpretation of Miguel de Cervantes’s Don Quixote. But his work does not end there: he provides insights into the rotten state of contemporary times by remaining fully grounded in the past. The quest for a rather unrealistic love and an unflinching desire to believe in the power of love against all odds remain at the crux of the novel.

Through the sprawling and deep love stories of Quichotte, Rushdie unveils the deteriorating postcolonial condition and posthumanist imaginations. Quichotte’s conviction that “love will find a way” shapes his entire being, and this rumination dominates his life in all aspects. The multifarious aspects of love and acceptance find an array of expressions in the novel. Fact and fiction are interspersed, and the reality of living in contemporary times is unleashed through real and fictional stories.

Rushdie thus shows, through this invigorating narrative, the urgency of going beyond existing definitions of love, denouncing intolerance in all forms. He is not the kind of storyteller who is admired by everyone, but he does not flinch from narrating the truth of the human condition. The novel offers a brilliant commentary on the sabotaging effect of intolerance and bigotry in major economies of the world: the oppression of minorities in India, racism against Asians in the West, and the deteriorating political climate in the United States and the United Kingdom.

Even so, the novel is not without its flaws. Even as Rushdie obsesses over the problems of the privileged class, his treatment of the lower strata of society is somewhat lopsided and wanting.