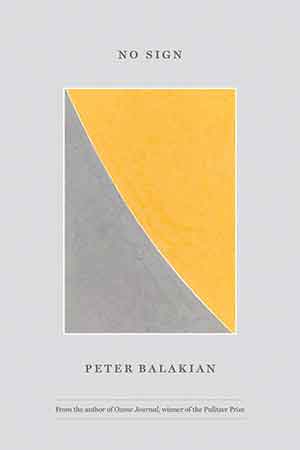 THE AUTHOR OF eight poetry collections, including Ozone Journal, which won a Pulitzer Prize in 2016, and several award-winning works of nonfiction, including the memoir Black Dog of Fate and The Burning Tigris, Peter Balakian is a good wine that needs no bush. Sensitively attuned to histories of disaffection, disruption, and derangement, he is a master of collage, resulting in poetry of expansive, long sequences. A poetry of montage, fluctuating rhythm, and inner tension where motion is skilfully embedded with emotion that never becomes transgressively extreme. Balakian’s refined intelligence keeps control throughout as he reveals his larger historical sense.

No Sign is, in several ways, a continuation of Ozone Journal in its sense of expanding consciousness, implications of memory, and an implicit view that the world cannot be fully fathomed. Covering family history, food, love, genocide, American imperialism, and planetary transmutation, Balakian’s technique and rhythms manifest psychic energy in enjambment, colloquialism, jargon, and rich allusion. When Balakian writes about food, it isn’t really just about food: vegetables and fruits are ingested as history, especially twentieth-century Armenian trauma, as in the poem “Eggplant”:

when a moon stayed all day—

when morning was a purple
elegy for the last friend seen—

when the fog of the riverbank
rose like a holy ghost.

Not that all foods are shadowed by the Armenian genocide: walnut is linked to da Vinci’s use of it to make ink; matza bear memory of a beloved Jewish boyhood friend; and the fig provides almost unalloyed, noncensorious pleasure.

The best poems have an openness of form that deploys charged syntax. Employing the best of what he has evidently learned from Dickinson, Eliot, Roethke, and Crane, for instance, Balakian works his material in such a way as to carry readers into his various journeys in time, moving in the first poem, “History, Bitterness,” from a phone booth in Saratoga Springs, 1986, back to 1919 in a French hotel, and then a quick moment in 1958, while continually tracing historical intersections of family, personal, Armenian, literary, and political realities. The propulsion is masterfully wrought with allusions to Baldwin, Sartre, Camus, Miles Davis, Louis Malle, Clemenceau, Lloyd George, an Algerian cabbie, and the poet’s great-uncle, building a structure that encompasses history vertically and horizontally. The next poem, “Tung Lai Shun,” set in a Chinese restaurant in New York, demonstrates by its very structure of extraordinary juxtapositions how motion and emotion are “more than sense and memory”: “Sylvia Plath was molten ore pouring from the hot pot / sizzling with pods and smashed heads of prawn.”

The book’s title is ironic, for signs of the speaker’s psyche and thematic preoccupations are everywhere. The first poem signals how a person (James Baldwin) can be trapped by personal and political history, showing, as well, how the speaker (Balakian) has history trapped within himself. A much later poem, “Stalled in Traffic” in the book’s final section, traces the “disconnected passage” of the poet’s ancestors from their homeland to America and culminates in “stone-rubbed” names in an Armenian cemetery. This section registers signs of an imagination struggling to read the truths of signs elsewhere—as in “Head of Anahit / British Museum,” which signals the Hellenic world and Der Zor, the Armenian Auschwitz, a movement in which the speaker corrects mistaken signage in the museum regarding a geographical location. And in “Coming to Istanbul,” the Armenian theme is further registered in “ghost signs” of a lost family.

The major piece of the entire collection is the titular multisectional, multisequential poem structured by a dialogue between a male and female speaker set in juxtaposition with a dialogue between a pair of lovers quoted from Alain Resnais’s Hiroshima mon Amour. Saturated with fear, terror, and astonishment about geological history and nuclear devastation, there are signs of history in rocks, extinct creatures, and the bloody burdens of war. This long poem’s staccato rhythm, broken clauses, and continual tension between forgetting and not forgetting mark strong “non-linear currrents,” but the aural soundtrack is contaminated by abstractions. However, “No Sign” should be taken as the final part of a trilogy, begun with “A- Train / Ziggurat / Elegy” and continued with “Ozone Journal” from Ziggurat and Ozone Journal, respectively. A trilogy of exceptional technical expertise, sincerity, moral clarity, and power.