The Book of Anna by Carmen Boullosa 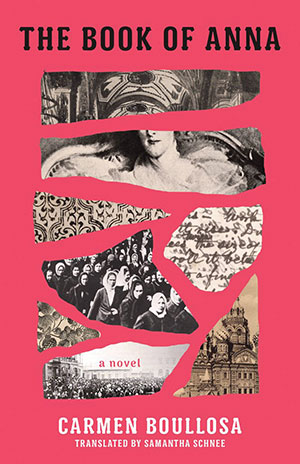 IN HER SUCCINCT yet electrifying homage to Tolstoy’s Anna Karenina, Mexican writer Carmen Boullosa conceptualizes the continuation of Sergei Karenin’s life a few decades after his mother’s apocalyptic suicide.

Tolstoy’s beloved Seryosha is distraught by a number of things, paramount among them the buried scandal and humiliation unearthed when an exclusive portrait of his late mother is discovered, which the curator of the tsar’s Hermitage, the hub of artistic activity in St. Petersburg, wishes to display. Sergei cannot bear the thought of his departed mother’s beauty being exploited by the superfluous society that so casually gossips about her life and secrets. The still-festering wound of his mother’s death is not helped by the omnipresence of his half-sister, Anya, who is the carbon copy of their mother. Guided by his stoic wife, Claudia, Sergei struggles to come to terms with the ignominy synonymous with his family name.

Beyond the bubble of the domestic antagonism faced by the Karenins, seamstress Clementine conspires with her fellow anarchists to dethrone the tsar, under the instruction of Father Gapon. The woman, along with hundreds of other unnamed revolutionaries, must soon decide whether their livelihoods or their blind commitment to the eradication of the tyrannical state is of more value.

Meanwhile, Anna Karenina’s secret novel, The Book of Anna, is excavated, which incites further speculation and wonder among her kin. The Book of Anna entwines classic fairy tales with firsthand hardships to create an allegory for Anna’s nebulous life.

By using succinct chapters laden with rich imagery and dialogue, Boullosa both extends the lives of Tolstoy’s notorious characters into unforeseen territory and conceives new characters of her own who must face their own turbulent future, interweaving their stories into what should be considered a magnum opus. While borrowing and drawing upon many of Tolstoy’s stylistic literary choices, Boullosa tells a refreshing tale encumbered with misery, plight, and thrill, which forces the reader to question whether or not the significance of the characters pertains to anything outside of Tolstoy’s beloved novel.