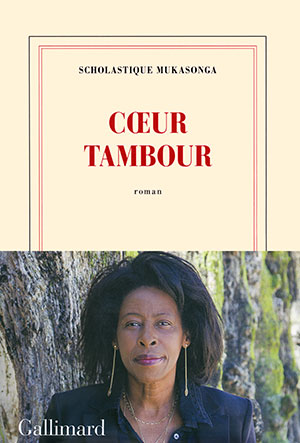 Scholastique Mukasonga, whose family was destroyed in the Rwandan genocide and who won a prestigious prize for the novel Notre-Dame du Nil (2012), now has published Cœur Tambour, less a novel than a fable, told in three parts, all concerned with the life and death of a woman who is both a musician and the symbol of the events in Rwanda.

The life and death of Kitami—a famous singer, who, among other prestigious accomplishments, sold thousands of records and filled a large concert hall in Queens—is told from several points of view. Her death remains a mystery, as her reputation is based not only on her talent but also on how she is related to Rwanda.

The story is first told as a third-person narration of events when Kitami meets the men who will make up her band, Pedro, their manager and their plans to travel. They are a Jamaican rasta, who welcomed the arrival of Haile Selassie to his island; a Guadeloupean who tells the story of Napoleon and the French takeover of Guadeloupe; and a man who defines himself as either Rwandan or Ugandan, depending on how European authorities cut up the countries in Africa. While Kitami is initially skeptical of West Indian drums, she learns that they originate in the suffering of Africans and that drums have hearts. After traveling to Africa, the band goes to Montserrat.

The second part is more descriptive, telling the memoirs of a young Rwandan woman named Prisca, who is a bright student living with a typical family and supported by a Catholic missionary, although as a Tutsi she cannot receive as much from the authorities as a Hutu. She becomes inspired by the spirit of Nyabinghi, the spirit of Kitami, a queen of women, who will never die. Prisca realizes that she has entered into the legend of the Black Amazon. With Pedro’s help she manages to take a great drum from its hiding spot before the Hutus destroy it.

The final part of the novel is termed “Ruguina,” the drum itself. It describes Kitami’s death and the investigation of officials in Montserrat, who consider several alternatives without reaching any conclusion. James, the Ugandan, sees the death as an attack on the drum, for Kitami wanted to silence the chant that would announce greater sufferings: “Perhaps, in sacrificing herself under the drum, she could ward off Misfortune, as the kings and queens of Rwanda had done in the past. Misfortune, Kitami had told him, always thinks it is the strongest, but doesn’t realize what comes afterward.” Mukasonga’s Cœur Tambour shows the strength that can come from describing the truth of Rwanda.