The Window Seat: Notes from a Life in Motion by Aminatta Forna 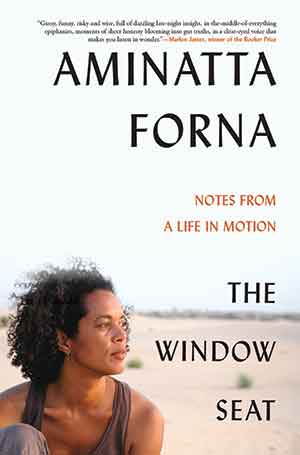 FLIGHT, MOVEMENT FROM place to place, past to present, border-crossings real and philosophical are central to award-winning Sierra Leonean novelist Aminatta Forna’s new essay collection, The Window Seat: Notes from a Life in Motion, which opens, fittingly, with an ode to the joys of commercial flight. “I love the drama of the take off. The improbability of the whole endeavour . . . the plane rises, dips and turns in a new quiet.” Forna’s collection glides between memoir, history, and literary theory and navigates topics as varied as memories of flying as an unaccompanied minor, to living in Tehran during Iran’s Islamic Revolution of 1979, to Forna’s family ties to the Shetlands and Sierra Leone. During this year of being grounded by the Covid-19 global pandemic, a year without passports, window seats, or the embrace of beloveds in faraway places, Forna’s Notes from a Life in Motion gorgeously enlarges the reader’s world.

Born in Scotland and raised in Sierra Leone and Great Britain, Forna spent periods of her childhood in Iran, Thailand, and Zambia, and her essays explore themes of identity and belonging in the vastly different places she’s called home. In “Obama and the Renaissance Generation,” she writes about the ways Obama’s family story mirror her own father’s and traces the differences and nuances between an African and US narrative about Obama’s personal history. She locates this history in its political context: “In the second half of the twentieth century, geopolitical events—the end of empires, the rise of nationalism in African countries, the Cold War, communism, and the second ‘Red Scare’—would see an exponential rise in the number of Africans sent to study overseas.” Forna’s father and Obama’s were born one year apart and were among a generation of young Africans who studied in the United Kingdom and the US and were then expected to apply what they had learned in their home countries. Celebrated African novelists of the day—Ayi Kwei Armah, Chinua Achebe, and Ama Ata Aidoo—wrote of this generation’s experiences. “The challenges of both leaving the motherland for the West and of return.” Forna ties the meeting of Obama’s parents and her own to “the unintended consequence of political policy.” Here as elsewhere throughout her collection, she is an expert synthesizer, linking varied topics from family history to literary theory to the rise and fall of empire with her intimate and conversational prose style.

Longer essays are interspersed with brief works: a three-page piece on a childhood memory about a production of Disney on Ice at Wembley Stadium gone wrong; a lyric on lionesses hunting at the edges of the herd to feed their young; in an upscale US grocery store bulk section, a man palms peanut butter into his mouth, which leads the author to reflect on the high cost of groceries in America.

“Power Walking” is an expansive and stunning essay about the politics of moving through the world as a Black woman. “Walking, for a woman, can be an act of transgression against male authority,” Forna writes as she details her own experiences navigating the intersecting violence of racism and misogyny in public spaces. The essay is a vital contribution to the literature of the female flâneur, what Lauren Elkin calls the Flâneuse in her book by the same title. I read Forna’s essay with psychogeography in mind, the theory coined by Guy Debord in 1955 as a way to understand how physical environments impact the emotions of individuals moving through them. Psychogeography values the experience of walking and is influenced by Marxist and anarchist theory. It can be a useful affect theory to probe power relations in public spaces, though most psychogeography isn’t authored by women of color but white men, who have vastly different experiences of their bodies in the world. Forna’s work is an excellent contribution to discourses on women’s embodied experiences of public space, centering an intersectional, Black feminist perspective.

In essays that turn to the nonhuman world, Forna’s prose is vivid and lush. She writes about foxes in her London garden. Her friendship with Dr. Jalloh, the only veterinarian in Sierra Leone, who works with the street dogs of Freetown. In “Wilder Things,” humans fall away but not deer. In an imagined future without us: “Gardens would grow fallow, borders cede to wildflowers, herds would gather on the overgrown lawns . . . and the injured doe, made anew, would walk the same tracks through the woods as deer have for hundreds of years.”

From a 2018 essay published by this magazine, Forna discusses writing about life’s complexities, traumatic events, and the role of empathy in literature. Reflecting on the danger of “empty empathy,” which she calls a condition “where we just look and listen and nothing comes out of it,” Forna offers prose writers an alternative craft. The most important thing in writing about trauma and pain is to center those experiences of pain beside the agency people have, Forna says, “to reflect people’s trauma in a way that makes sense of what has happened to them in the wider picture of the world and doesn’t leave them feeling like an exhibit of damage.”

In this time of global pandemic, climate catastrophe, and international protests against racism and police brutality, Forna’s seventeen essays center the myriad complexities and traumas of the day. They are equally joyful, tender, and brimming with affection. I was reminded, while reading her important contribution to the global literature of today, of Gwendolyn Brooks writing on commitment to collective care and social justice in her poem “Paul Robeson”: “We are each other’s / harvest: / we are each other’s / business: / we are each other’s magnitude and bond.” Forna’s essays are works of magnitude and bond, in allegiance with her vast beloved community.