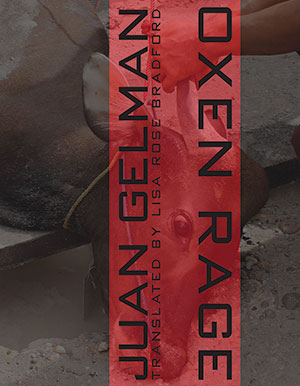 The title rings true. Juan Gelman’s Oxen Rage embodies tremendous tension (see WLT, Nov. 2013, 28). Submission and anger compete within and among the collection’s poems, which Gelman wrote between 1963 and 1968. These are only two of the states and emotions the poems negotiate and transform. Tenderness, eroticism, fear, scorn, exuberance, and joy clash and work together across the volume’s dozen sections and roughly 150 poems. The ambition the collection embodies is heightened when Gelman creates additional poets. His “translations” of John Wendell and Yamanokuchi Ando are in fact Gelman’s own poems.

The collection’s energy and the craft that transmits it come to the fore through Gelman’s unpredictable forms, sonorous neologisms, and materialist imagery. One poem, “VI (planetas),” exemplifies abundance and unpredictable force by shifting abruptly among subjects and portraying connections between an “I” and a “You” that are not confined by the poem’s structure or the world it creates.

Tree branches that cry or sing in this piece find analogues in poems that also associate voice with tactility, such as “Himno de la victoria”(Victory hymn) and “Casualidades”(Strokes of luck), both of which relate singing with sewing. The latter includes these lines, well translated by Lisa Rose Bradford: “how can i be sung at this point / by an entire population that piecemeals me / half toward frenzy half toward pleasance? / how are they to stitch me back together again?”

At the level of word and image, organizational tension bursts at the seams. Consider the synesthesia and indirect apostrophe that open the poem titled “I”: “some sound of life / like the orange in the boy / would everyone hear it / rustling in your voice?” Bradford’s translation occasionally alters the original poem’s meaning, as when it attributes subjects to verbs that remain ambiguous in the Spanish, but her skill and evident effort pay off. For instance, Bradford meets the challenge of preserving the neologistic play with sound in “de amor entre las bestias un gran ejemplo jemplo” by rendering it as “of love between creatures as a great illustration may well lusterate.”

Throughout Oxen Rage, Gelman’s evocations of materiality take special form as words that resist referentiality. Bradford’s impressive translation presents Gelman well to English-language readers and thus invites and challenges an expanded audience to become part of his poetry’s sharp-edged world, with all its dangers and pleasures dynamically intact.