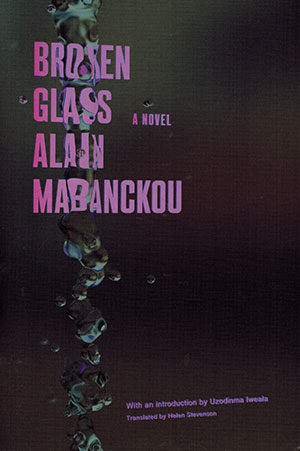 Last year, Black Moses stood as a testament to Alain Mabanckou’s literary prowess, positing a journey of growth amid the grotesque while ensuring a classic. Mabanckou’s tendency to compose intricate figures against the backdrop of the Republic of the Congo, however, echoed over a decade prior within Broken Glass. Bizarre, harrowing, and humorous even in its darkest moments, Broken Glass entails many of the stylistic experiments and musings that would eventually position Mabanckou as a master of his craft.

Unlike the novelist’s most recent outing, Broken Glass is less of a journey than it is a hazy collection of vignettes transcribed through the sometimes incoherent lens of the titular drunkard. Once an instructor, Broken Glass spends much of his conscious time in Credit Gone West, a bar playing host to several characters, each dragging a fractured history not unlike Broken Glass himself. Much of the work involves the abrasive recountings of the denizens’ past as they desperately struggle to harness their own tragedies. Though some resolve to change and others to stagnate, most accept their time at Credit Gone West as an indefinite stint of purgatory. Though this narrative is not quite as engaging as that of Black Moses, it does offer far more of what Mabanckou builds his power upon: intense, personal illustrations.

The prose itself, like much of Mabanckou’s work, opts against the most typical stylistic conventions, and translator Helen Stevenson maintains the writer’s portrait of consciousness verbatim. Recounts and actions often mesh like the depths of a most severe relapse, yet moments of epiphany emerge as if hurled from the crevices of Broken Glass’s mind. Mabanckou is surgical with his use of incoherence—faint allusions will reward the most patient of readers as the text unravels.

Perhaps only comparable to his own memoir, The Lights of Pointe-Noire, Broken Glass reflects Mabanckou’s concern with an individual’s ability to digest the worst experiences living may propose. No chronicle is particularly critical, but each one dives deep into the persistence of survival when only the sparsest threads of it remain. There is no individual considered without damage, many to an irreparable extent, but their tales convey an undeniable meaning, one that Mabanckou readily distills within his text.

Broken Glass is not Mabanckou’s best work, but it is a welcome reissue for anyone to trace the author’s present success. Throughout the text lie hallmarks of Mabanckou’s career, and in tandem with The Lights of Pointe-Noire, Broken Glass is one of the best jumping-off points to explore the auteur.