The Death of Comrade President by Alain Mabanckou 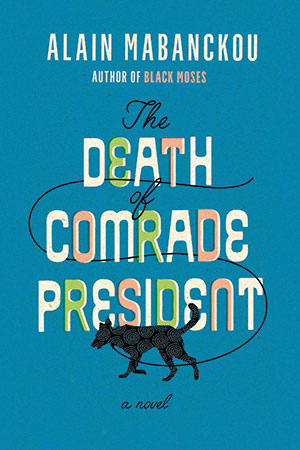 IN 2015, ALAIN MABANCKOU crafted a modern folktale with Black Moses. The novel followed the titular child’s odyssey through one of the most violent periods in the Congo’s history. Despite the youthful perspective, Mabanckou’s deep connection with the plight still allowed the severity of Black Moses’s setting to resonate. In retrospect, however, some of the novel’s passages felt a little far removed, offsetting the delicate balance of timely reprieve and a distraction. The Death of Comrade President, Mabanckou’s latest outing, provides a remedy, leaning less on convention and more on the realism that made pieces like Broken Glass so defining.

Comrade President leans heavily into Mabanckou’s backgrounds, serving in part as a welcome expansion to his 2015 memoir, The Lights of Pointe-Noire (see WLT, Sept. 2016, 68). The novel traces Michel, a boy on the cusp of adolescence living with his father, Papa Roger, and one of his father’s wives, Maman Pauline. As the mounting pressure of academia and an education outside of his home rises, so too does the turmoil of the Congolese government. Shortly after the announcement of Comrade President Marien Ngouabi’s assassination, Michel’s family is thrown into turmoil as his family’s safety is compromised. This is further compounded when his dog, Mboua Mabé, runs away in panic. Between interpreting his parents’ tension and investigating the village’s back alleys for his pet, Michel begins to understand the symbols that have perpetuated an almost constant national strife.

Mabanckou’s choice to interpret a day of cataclysm demonstrates his concern with connecting the plight of the Congo to an international audience. He does so without diminishing the severity, and his practice of weaving radio transcripts into Michel’s musings provides at least a theory of what forces have led to the discord. This digestion of information feels less akin to Black Moses and more so like a truncated parallel to the early movements of Marjane Satrapi’s Persepolis.

The only minor setback for Comrade President is its brevity. The novel proceeds to a fever pitch, with its falling action feeling like mere seconds. This does little to detract from the power of the novel, but the tension is still mesmerizing, if not tempered by a sense of longing.

Mabanckou continues his contributions of necessary African literature with Comrade President. Yet, as exceptional as this outing is, one suspects that the author’s best work may be yet to come.